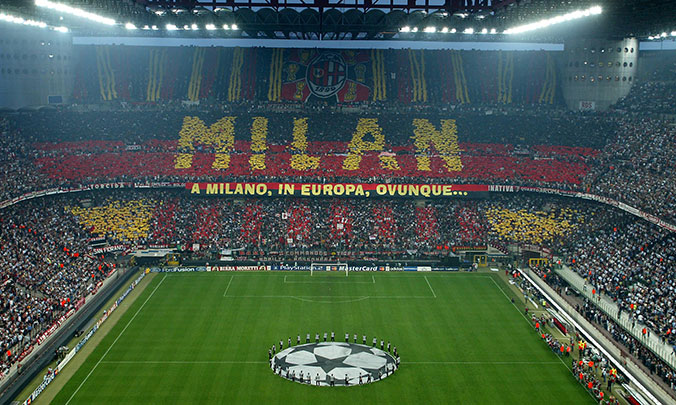 You may already know that the other Europen teams find it difficult to win a match at San Siro stadium. You probably know too that most of the San Siro spectators – Mafias – view the game shirtless and make a hell of a noise. But what else do you know about San Siro? Do you know the San Siro stadium’s full capacity, its history, its football teams, or its location?

The San Siro Stadium derived its name from San Siro, the district of Milan housing it. Milan, Italy is the home city of two Italian football giants – AC Milan and Inter Milan. This should easily interpret that both teams own the stadium in their city. However, that is not always the case as you must have seen with the two Manchester clubs – Manchester United and Manchester City. Both teams have their own stadium.

It also was not the case with these Italian sides. AC Milan owned the San Siro stadium from inception until much later when Inter Milan joined them to claim the stadium for their home games.

In this post, we will share with you the full history of the San Siro stadium. How it started and what it is now. While accomplishing this, we will also provide you with additional information about the San Siro stadium including its football teams, location, and major events the stadium hosts.

History of the San Siro Stadium

You will mostly hear people refer to the San Siro Stadium or the Giuseppe Meazza Stadium as simply San Siro. Though San Siro is simply the district the stadium is located, it is way easier to call the stadium San Siro.

The construction of this historical Italian stadium began in 1925 borne of AC Milan’s president’s (Piero Pirelli) idea. Piero loved English football, so he directed constructors to build the stadium in the English style. They designed the stadium purely for football and so it had no athletics track.

It took constructors 13 months to complete the San Siro stadium as against 18 months to 3 years, which is the standard. Between August 1925 and September 1926. AC Milan opened the stadium with a match with Genoa, where they beat the Genoese team 2 – 1. However, the stadium’s first official football match was against the same Genoa on October 3, 1926. But this time Genoa beat AC Milan 2 – 1.

Engineer Alberto Cugini and architect Ulisse Stacchini designed the initial structure of San Siro. the stadium was then composed of four separate stands square to the pitch and made out of reinforced concrete. One of these stands was partially covered by a roof, along with standing section level to the pitch. Then, the San Siro stadium capacity was 35,000.

Between 1948 and 1955, engineers Armando Ronca and Ferruccio Calzolari designed the project for the second extension of the San Siro stadium. The new design aimed at increasing the San Siro stadium capacity from 50,000 to 150,000 visitors. These visionary engineers proposed three additional, vertically arranged, rings of spectator rows.

The Future of the San Siro Stadium

There are factual talks that the Italian sides will replace San Siro. On June 24, 2019, AC Milan and FC Internazionale (Inter Milan) announced their intention to replace San Sirp with a new stadium. This new stadium would have a spectator capacity of 60,000, and it would be built right next to San Siro.

The anticipated cost of building this new stadium is US$800 million. Both teams are expecting the stadium to be ready for the 2022–23 season and San Siro will function till after 2026. Meanwhile, the constructors of the new stadium are basing the design upon the Mercedes-Benz Stadium in Atlanta, Georgia, United States.

However, the mayor Giuseppe Sala and the comune of Milan asked for time and expressed doubts and strong criticism of the project. Fans of both teams are also skeptical about the project and are opposing it.

While the plans for a new stadium are incubating, the San Siro stadium will host the opening ceremony of the 2026 Winter Olympics of Milan and Cortina d’Ampezzo.

We have explained the San Siro Stadium capacity while discussing the stadium’s history. We will highlight the capacity here in case you missed it.

According to Wikipedia, the current capacity of the San Siro stadium is 80,018.

San Siro is the football campaign ground of both AC Milan and Internazionale (Inter) Milan. The stadium is both teams’ home ground. While AC Milan began on the 16th of December 1899, Inter Milan began much later, on the 9th of March 1901. There has been a fierce rivalry between these two Italian football giants since its inception.

AC Milan has officially faced off their neighbors Inter Milan 223 times. This record covers the Italian football First Championships, Serie A, Championship, and Campionato Alta Italia. It also covers Coppa Italia, Supercoppa Italiana, and the UEFA Champions League. Out of the 223 derby clashes, Inter Milan has won 80 matches while AC Milan has won 76 Matches. In between them, they have shared 67 draws. Both teams have scored a total of 602 goals, Inter giving 303 goals and AC Milan responding with 299 goals.

In their last derby clash at the full capacity San Siro stadium, Inter Milan beat AC Milan 3 goals to 2. It was a Serie A fixture that took place on March 17, 2019. Their next match will be on the 9th of September, 2019, and we may experience another narrow win well-fought.

The Location of San Siro

Arriving at San Siro by Car

If you’re getting to the San Siro stadium by car from the direction of Turin (A4), Genova (A7), or Bologna (Autostrada del Sole), make your way to the western ring road (Tangenziale Ovest). Then take exit 3 to the Via Novara. You’ll see overhead signs that will direct you from the motorway to the stadium.

If you’re coming from the direction of Venezia, take the exit towards the Viale Certosa. After the exit, you’ll see signs that will guide you to the stadium.

SEE ALSO:   How To Recover From Sports Injuries Faster

Getting to San Siro by Metro

You can also reach San Siro easily by metro, thanks to the recently opened new purple M5 metro line. The nearest stations are San Siro Ippodromo and San Siro Stadio, both of which are a short walk from the stadium. Line M5 passes north of Milan’s city center past Garibaldi station and from most central places Metro will stop for a change either at Lotto (red M1 line) or Garibaldi station (green M2 line). It takes a little under 20 minutes to get from Piazza Duomo to the stadium.

You can also reach the San Siro stadium with tram 16. Take the tram in the center of Milan (west of Piazza Duomo) to San Siro Stadio, the last stop on the line. The journey takes about half an hour.

Don’t get stuck trying to go see a Derby della Madonnina. You can easily clarify your location and navigate to San Siro by using the San Siro map below.

How to Get Your San Siro Tickets

Nothing beats going to the stadium to watch your team play. Be it a Derby di Milano or a Milan match (AC or Inter) against another team, the excitement is unexplainable. However, you’ll need a ticket to pass through the entrance gate.

We’ll share with you in the following sections how to purchase AC Milan Tickets as well as Inter Milan Tickets. But note, however, by purchasing a ticket for San Siro stadium, you agree to the Italian regulation applicable to spectators of football matches in the country. These regulations are issued by FIFA, UEFA, the Italian Football Association (F.I.G.C.), and the Italian Football League. These football bodies are in conjunction with the Authority for Public Security and Safety.

You can buy tickets for AC Milan games online through the:

You can as well get your AC Milan ticket at The Casa Milan Ticket office located at the Via Aldo Rossi 8, in the north of the city (closest metro QT8).

If you don’t want to buy your Milan tickets online, you can get tickets at the high-capacity San Siro stadium before the start of the match. However, Milan tends to only sell out the home matches versus Inter and Juventus, and you’ll provide an ID before they sell you tickets.

You can buy tickets for Inter Milan matches online through:

Vivaticket has multiple sales points in the center around Piazza Duomo, at the San Siro ticket office, or at the Inter Store (open from Thursdays to Saturdays) at the Galleria Passarella 2 in Milan’s city center.

You may also buy tickets at the stadium on the day of the match. But just like Milan, Inter tends to only sell out the derby and the match against Juventus, of which you’ll need an ID to successfully purchase your tickets.

Inter gradually increases their ticket prices for a number of high-profile matches, resulting in prices ranging from €65.00 to €275.00 for the Milan derby. You may already know that tickets are somewhat more expensive if you buy them for the matchday at the stadium.

Note, however, that Inter sells tickets for the third tier only the rest are sold out.

The major football events that take place at the San Siro football stadium are the football matches for which the high-capacity stadium was built. Serie A would commence for the 2019-20 season on Saturday, 24 August 2019, and AC Milan would be playing their first match away against the Udinese side the next day. However, AC Milan’s first San Siro fixture will be against Brescia on the last day of August.

Although San Siro was built for footballing activities, the stadium hosts several other events. These other events at the San Siro football stadium are mainly concerts and music tours.

Here is a list of popular tours that San Siro has hosted.

San Siro is the home to two big Italian football teams – AC Milan and Inter Milan. This is the biggest stadium in Italy and it is located in Milan, Italy. Piero Pirelli, AC Milan’s president, approved the construction of the San Siro stadium in 1926 to hold a capacity of 35,000 spectators. This Italian football stadium became the Giuseppe Meazza Stadium in 1980 and also became the home stadium for Inter Milan’s football campaign.

To date, the two teams have held a fierce rivalry which makes the Serie A football league all the more interesting. You must also know that the San Siro football stadium is not only for football matches. Music superstars hold concerts in the stadium, so you may like to check out for upcoming concerts in San Siro.

is Intermilian Sharing the same stadium with AC Millian

Yes! In 1947, Inter and Milan started playing both their fixtures at the San Siro. the stadium is owned by the City of Milan, with both clubs continuing on as shared tenants

When Will AC Millian Launch their new Stadium?

The Milan stadium is expected to be finished in time for the 2026/7 season, why the other Italian clubs will follow suit and build or renovate their own. And this will help to revitalize Italian football.

Between Inter and AC Millian who has won more matches at San Siro?