If you plan to apply to Study in Vanderbilt University for the next academic year, you need to know the admission Requirements, Courses Offered, Tuition Fee, Ranking of Universities because Every university, has certain Admission requirements into a course of study and this includes the University of Vanderbilt.

Vanderbilt University (Vandy) is a private research university established in 1873 in Nashville, Tennessee.

It was named in honor of shipping and rail magnate Cornelius Vanderbilt, who provided the school its initial $1 million endowments in hopes that his gift and the greater work of the university would help heal the sectional wounds inflicted by the Civil War.

Furthermore, they nicknamed the university athletes Commodores and the Mascot is called Mr. Commodore (Mr. C) with Black and Gold as the uniform colors. The university has an official website at www.vanderbilt.edu.

Like I said earlier, Vanderbilt University (Vandy) is a private research university established in 1873 in Nashville, Tennessee.

Vanderbilt receives over 12,000 students from all 50 U.S. states and over 100 foreign countries in its four undergraduate and six graduate and professional schools.

All of the university’s facilities are situated on its urban 330-acre (1.3 km2) campus in the heart of Nashville, 1.5 miles (2.4 km) from downtown except the off-campus observatory and the Institute.

The campus library system contains over 8 million items across its ten libraries and stands as one of the nation’s top research libraries.

The Vanderbilt Television News Archive holds the most extensive collection of television news coverage in the world, with over 40,000 hours of content. Vanderbilt’s DNA databank, BioVU has over 200 ongoing projects and is holding over 225,000 samples.

The Vanderbilt Institute for Space and Defense Electronics provides integral support to several companies, agencies, and governmental units, including Boeing, NASA, and the United States Department of Defense.

Vanderbilt University is a founding member of the Southeastern Conference and has been the conference’s only private school since its inception.

In 2017, Vanderbilt accepted 10.9% of its 31,462 freshman applicants, making it one of the most selective universities in the country. With 65% of the total student body coming from outside the South and 8% from outside of the United States.

In 2018, the Office of Undergraduate Admissions accepted 7.3% of its 30,146 Regular Decision applicants, making Vanderbilt the most selective university in the state of Tennessee.]

In 2015, Vanderbilt University was ranked fifth overall and fourth among private universities according to the National Merit Scholarship Corporation’s annual report.

Freshmen students of Vanderbilt can choose between 70 majors, or create their own, in its four undergraduate schools and colleges: the College of Arts and Science, the School of Engineering, Peabody College of Education and Human Development, and Blair School of Music.

Its Institute for Space and Defense Electronics, in the Department of Electrical Engineering and Computer Science, includes the world’s largest academic facility involved in radiation-effects research.

Vanderbilt University is a member of the SEC Academic Consortium (SECU), a collaborative Institute designed to promote research, scholarship, and achievement among its member universities in the Southeastern Conference.

In its 2018 edition, U.S. News & World Report ranked Vanderbilt’s graduate program, the Peabody College of Education 3rd, the Vanderbilt Law School was listed at 16th, the School of Medicine was listed at 15th among research-oriented medical schools.

U.S. News & World Report ranked Vanderbilt first in the nation in the fields of special education, educational administration, and audiology.

The Academic Ranking of World Universities ranks Vanderbilt as the 60th-best university in the world, 18th best in the world for Clinical Medicine and Pharmacy, and 21st in Social Sciences.

The 2007 Faculty Scholarly Productivity Index studied the scholarly output of the faculty of nearly 7,300 doctoral programs around the United States, and ranked Vanderbilt 8th among large research universities, and 1st in the areas of comparative literature, educational leadership, pharmacology, Portuguese, Spanish, and special education.

Vanderbilt was the only university in the top 15 on both their Best Greek life and Best Colleges rankings.

49 percent of the full-time undergraduates at Vanderbilt university receive need-based financial aid, and the average need-based scholarship or grant award is $41,331. The Tuition fees for 2018/2019 are $48,600. Vanderbilt University has an acceptance rate of 12%.

Vanderbilt has the Score Choice policy of “Highest Section” also known as “super scoring”. This means applicants can send as many SAT results as possible and of all the scores Vanderbilt university receive, the highest section scores across all SAT test submitted is selected.

The average ACT score at Vanderbilt is 34. This score makes Vanderbilt Extremely Competitive for ACT scores.

Vanderbilt requires you to take the SAT/ACT Writing section. SAT II scores are not required but will be evaluated. Applicants in engineering are encouraged to take one of the SAT IIs in math.

Common, Electronic, and Universal Applications are available at the Vanderbilt university though, supplemental forms will be required for a universal application.

An essay or Personal Statement is required for all freshmen including 3 Letters of Recommendation. Application Fee of $50 although a Fee Waiver is available.

An Interview is not required and the due date to send the Testing scores is January 1. Coursework subjects required include; English, Maths, Science, Foreign Language, Social Studies, History, Electives.

There are three major merit scholarships with deadlines of December 1st and December 15th. To apply, applicants have to submit their regular Vanderbilt application, access their online Vanderbilt admission account, and apply for scholarships.

The Vanderbilt University Medical Center (VUMC) is an independent private non-profit medical provider with multiple hospitals and clinics and facilities in Nashville and throughout Middle Tennessee.

It is located at 1211 Medical Center Drive, Nashville, Tennessee, United States. Founded in 1874 and has an official website at www.vanderbilthealth.com.

VUMC is known for its highly acclaimed teaching hospital which performs more than 35,000 surgical procedures and receives 65,000 patients in its Emergency Room.

Vanderbilt is home to BioVU, one of the world’s largest DNA databanks, which holds more than 170,000 samples and is used to discover new genetic predictors of disease and drug action by scientists worldwide.

The Vanderbilt Children’s Hospital has been in operation since the 1970s in the main Vanderbilt hospital until 2004 when Monroe J. Carell, Jr., former CEO of Central Parking Corporation, raised $79 million for the construction of a new stand-alone facility.

In 1971 Earl Sutherland, Jr., received the prize for his discovery of Cyclic AMP. Stanley Cohen shared a Nobel in 1986, with Rita Levi-Montalcini of Italy for their discovery of epidermal growth factor, a hormone that can speed up certain biological processes.

RELATED:  Best Universities In Uganda To Study In 2022 | Ranking

The LifeFlight helicopter ambulance service has five helicopters, staffed with Vanderbilt Flight Paramedics and Nurses and an airplane transport and makes more than 2,800 flights a year. Vanderbilt also has an organ transplantation center.

The Vanderbilt-Ingram Cancer Center is the only National Cancer Institute-designated cancer center in Tennessee that provides treatment for adult and pediatric cancers.

The center is a member of the National Comprehensive Cancer Network, a non-profit alliance of 21 centers focused on improving the quality and efficiency of cancer care. VUMC is ranked in the top 10 among the 126 medical schools in the United States in receipt of research funding from the National Institutes of Health.

Many Vanderbilt alumni have gone on to make significant contributions in politics and within the business world, including;

We are poised to give to the best Information. This information is based on the 2022-2023 Academic year. We’ll keep you posted with the Latest Happenings. at Vanderbilt University.

If you have any questions and contributions. Carefully use the comment box. we’ll reply to you ASAP.

Read More
Applications are invited at the Israel-Asia Center for Israel-Asia Leaders Fellowship. Israeli and Asian students are eligible to apply…
IINTERNATIONAL SCHOLARSHIPS 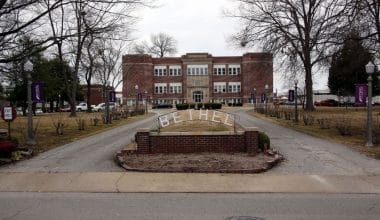 Read More
When you search through the list of best schools in Tennessee, Bethel University Tn appears to be among…
DISCLOSURE: This post may contain affiliate links, meaning when you click the links and make a purchase, we receive a commission.