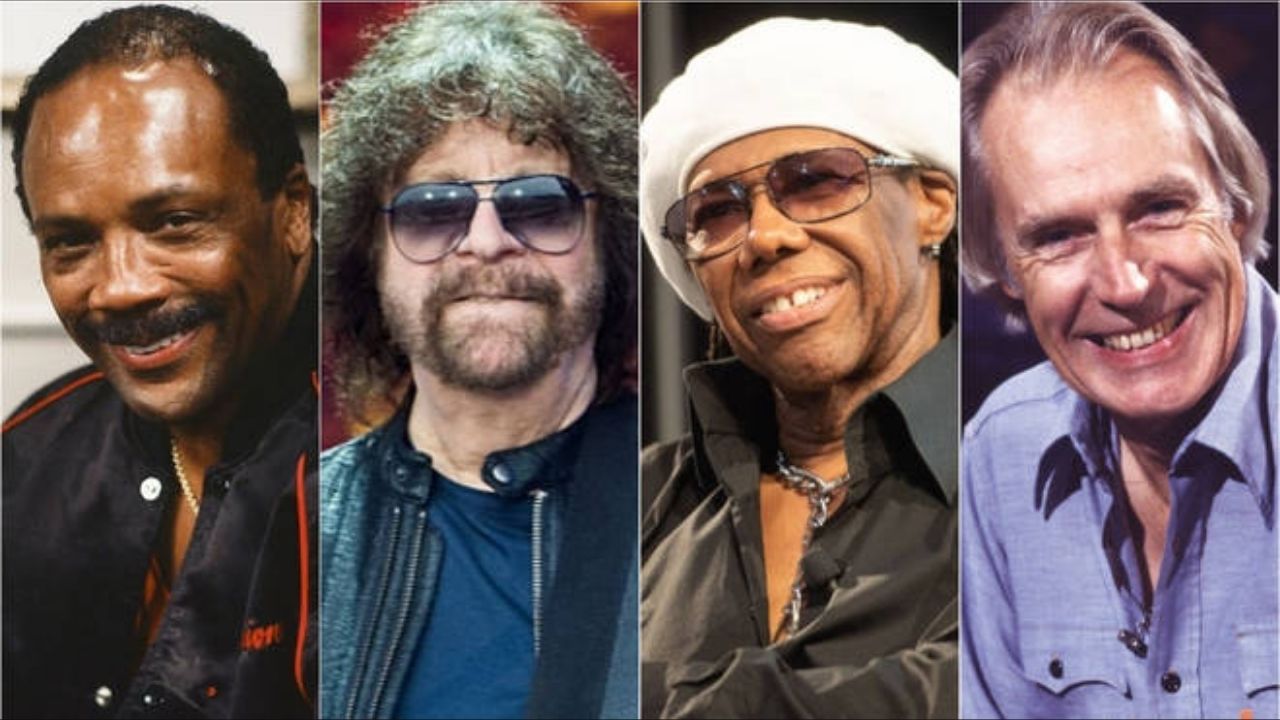 Being a music producer is a dream job of many. Music producers are professionals responsible for shaping the sound of individual music tracks and guiding the overall vision of an album.

Music itself is an industry, so learning the business of music is a critical part of making it as a producer. If you are interested in being a music producer, or you simply want to find out all you need to know about the highest paid music producers, then this article is for you. Keep reading.

Is Music production a Wonderful Career?

If you have a passion for music; if you constantly mix and edit beats and music, you might actually have a good chance at making a suitable career out of music production.

A modern music producer can be responsible for a variety of tasks, including composing the music, managing an artist, hiring musicians, mixing and mastering the song, and any other component that goes into making music.

With hard work, dedication, knowledge, and the right connections, you can make it. Be sure you are actually willing to commit the pursuing the career. You don’t want to waste to waste your time doing something you don’t want to do.

Being a superb music producer doesn’t happen overnight, but it can make for an illustrious career if it’s your passion and you master it.

Being a Music Producer can be time-consuming and exhausting, but the reward certainly outweighs the cost.

How do Music Producers Get Paid?

As a music producer, how you would get paid depends on the contract between you and your employer. A lot of factors come together to determine how much it would pay you.

Your experiences as a music producer, the songs you would work on and the number of songs to be recorded are all determinant factors.

As a music producer, you and your employer can also decide on whether it would pay you royalties on each song and the percentage of each.

The record royalty for a music producer is usually between 3% and 4% of the records sales price, or 20% to 25% of the artist’s royalties.

What do Music Producers do?

A music producer helps artists within the studio record and create professional sounding music. They work together with artists to develop a solid tone and feel in the recording of their music.

He may also offer artistic input and suggestions regarding the arrangement of songwriting. Basically, a music producer goes through songs to find arrangement ideas.

As a music producer, it is your job to go through songs and find where instrument parts are clashing. You are to also mix music- adjusting volumes and effects on each track and producing a stereo mix.

How much do Music Producers Make?

Generally, it has been put that music producers make close to $37,000. The amount you can earn depends on your capacity, capabilities, experience and company you work in.

Many also accept alternative forms of compensation, like service exchanges. Many music producers stress that while earnings can fluctuate, the job is about the satisfaction of artistic expression and love of music more than money.

How to become a music producer?

There are a lot of ways through which you can become a music producer. However, if you want to pursue a career in being a music producer, there are certain steps you can take. Here are a few-

Who are the 20 Highest-Paid Music Producers in the World?

Music producers are actually paid very high for their immense contributions to music. Here are the 20 highest-paid music producers in the world.

Rick Rubin is a co-founder of Def Jam Records which JayZ headed before he left with his friend Russell Simmons. He was a co-president at Columbia Records too.

His net worth is estimated to be $400 million. He has to his credit the production of many hits from artists such as JayZ, Kanye West and Adele.

He is best known as the founder of the Motown record label and its subsidiaries, which was the highest-earning African-American business for decades.

He was among the first to launch and market African-American music to the entire world. His net worth is estimated at $345 million.

Karl Martin Sandberg known professionally as Max Martin, is a Swedish record producer, songwriter, and one of the highest-paid musicians before his retirement.

Max Martin has written and co-written 22 “Billboard’s Hot 100 Songs”, many of which he produced or co-produced. His net worth is estimated at $260 million.

The Neptunes are an American production duo composed of Pharrell Williams and Chad Hugo, formed in Virginia Beach, Virginia in 1990.

Williams often provides additional vocals on records and appears in the duo’s music videos, while Hugo stays behind the scenes. They have amassed a wealth of $155 million.

The co-founder of Chic, Rodgers has written, produced, and performed on albums that have sold over 500 million units and 75 million singles worldwide. His net worth is about $100 million.

He also held several senior executive roles at media companies and contributed to a wide range of charitable causes, including his work for The Prince’s Trust and the Caribbean island of Montserrat.

He was a famous record producer who shaped the job description of what the title truly means. His role as the Beatles 5th member is legendary.

This is illustrated by the many Grammys, Brits and lifetime achievements awards he has won. His net worth is about $65 million.

Finneas Baird O’Connell known mostly by his first name, is an American singer-songwriter, record producer, audio engineer, and actor. He has written and produced music for various artists, including his sister, Billie Eilish. His net worth in 2022 is an astounding amount of $20 million.

Linda got her big break with the 90s single, What’s up? By Four Non-Blondes. Her career as a music producer has eclipsed, making her, arguably, the most famous producer on the planet.

It comes to no surprise that she is presently a multimillionaire. She currently has a net worth of $18million.

Imogen Heap is an acclaimed English singer-songwriter, engineer & producer and audio engineer. As a child, someone classically trained her in piano, cello and clarinet.

She later became a self-taught guitarist and drummer. In addition, she was also an early adopter of Atari computers for music production. At 18 she signed with Almo Sounds and released her debut album – ‘iMegaphone’ – produced by long-term collaborator Guy Sigsworth. She has a net worth of about $10million.

MNEK is a very brilliant music producer. His brilliance granted him early success. His net worth in 2022 is approximately $5 million. He produced some outstanding works for Duo Lipa, Christina Aguilera, Selena Gomez. MNEK is from South London.

Sylvia Massey is a famous American music record producer. She is also an author and an engineer. She has a net worth of about $2 million and ranks one of the highest music producers.

Formerly, she was the producer for a comedy rock band called Green Jelly.

David had early success in his career. He has gone on to producing worldwide hits like “Unbreak my heart” by Toni Braxton and “Because You Loved Me” sung by Celine Dion. His net worth is currently somewhere around $150 million.

Quincy Jones- A true legend, this record producer, songwriter, composer, arranger and instrumentalist is an institution in the American music industry.

He has produced some of the most notable and best artists in the world, including some of the best-selling albums of all time, like Michael Jackson’s Off the Wall (1979), Thriller (1982), and Bad (1987).

Other world-famous artists Jones has produced and written for includes Frank Sinatra and Ray Charles. His net worth is about 500million.

Kenneth Brian Edmonds, better known by his stage name Babyface, is an American singer, songwriter, and record producer. He has written and produced over 26 number-one R&B hits throughout his career and has won 12 Grammy Awards.

He was ranked number 20 on NME’s 50 of The Greatest Producers Ever list and is now one of the highest-paid music producers in the world. His net worth is about $200 million.

Over 1,000 unique artists have recorded a six-time Grammy Award winner and three-time Academy Award winner. His net worth is currently around $160 million.

Harvey Phillips Spector was an American record producer, musician, and songwriter known for his innovative recording practices and entrepreneurship in the 1960s, followed decades later by his two trials and conviction for murder in the 2000s.

His net worth is currently $30 million.

After some success in the 1980s and 1990s as a record producer, talent scout and consultant in the UK music industry, Cowell came to public prominence in 2001.

He came up as a judge on Pop Idol, a show which he and its creator Simon Fuller successfully pitched to ITV Controller of Entertainment Claudia Rosencrantz.

He currently ranks as one of the highest-paid music producers and has a net worth of $500 million.

Robert John “Mutt” Lange is a South African record producer and songwriter. He is known for his work in the studio, producing many of rock’s most famous albums.

He has produced albums for, or otherwise worked with, artists such as AC/DC, Def Leppard, The Michael Stanley Band, The Boomtown Rats, Foreigner, Michael Bolton, The Cars, Bryan Adams, Huey Lewis, amongst others. His net worth is about $220 million.

He has received widespread acclaim for his innovative production work and distinctive “stuttering” rhythmic style. His net worth is currently $85 million.

Can I be a music producer from home?

Mastering the technology and producing your own music takes time, effort, and practice, but if you are really interested and willing to learn, you be able to do it.

How easy is it to be a music producer?

This depends largely on the time you put into it. Alan Walker says it took him over a year to understand music production.

How can I become a successful music producer?

Practice is key. It is often said that practice makes perfect.

Do I need degrees to become a successful music producer?

No. Try to focus on connections instead. The more connections you have, the easier it would be for you to get jobs. A degree can help, however.

Despite the importance of the role and the fact that a highest-paid music producer can play in the success of a record, they often remain relatively unknown to the general public.

Their contribution is often overlooked. Historically, a producer’s role has been to realize the potential of a record. Usually by getting the best out of the artist. However, the era of the superstar producer is very much upon us.