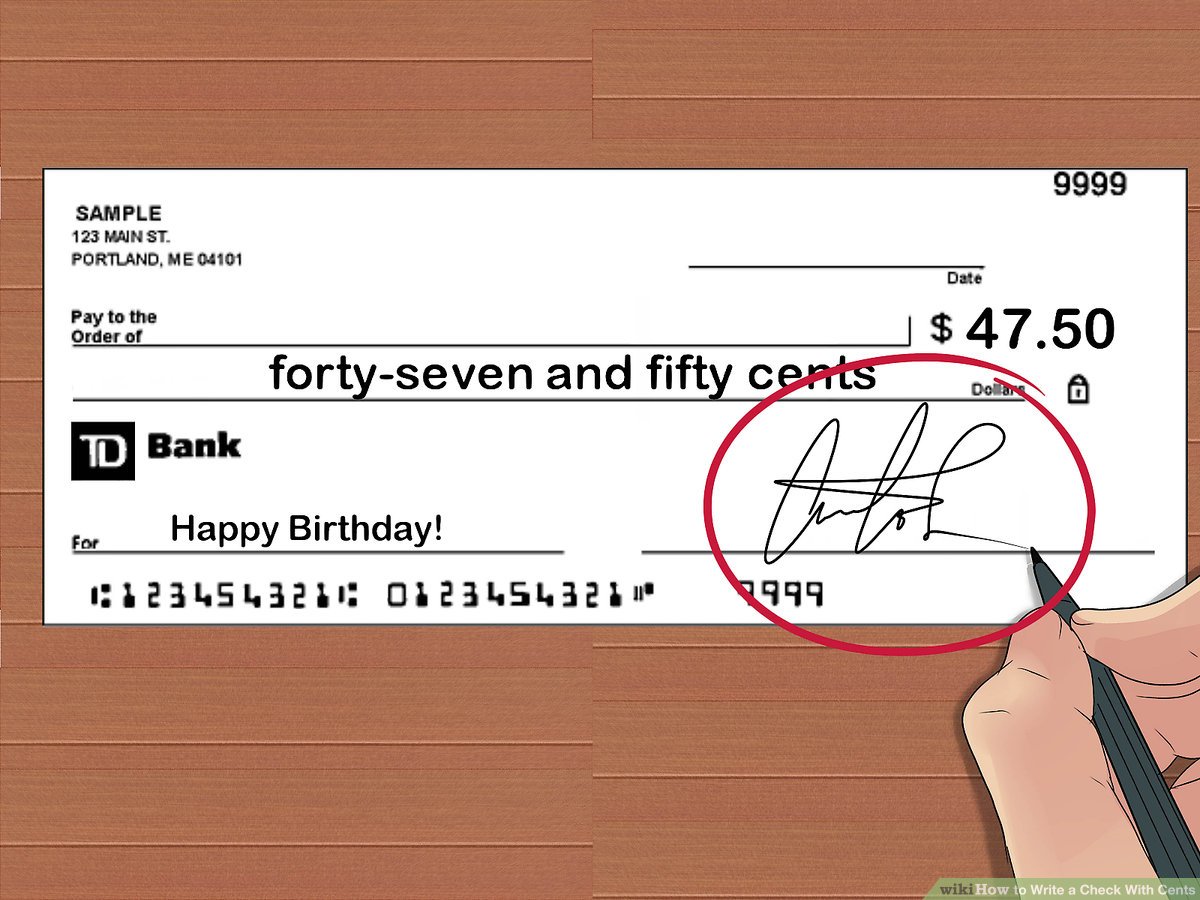 Writing a check isn’t as easy as it sounds. It needs you to be extra careful and accurate and even more so when it comes down to writing a check with dollars and cents.

In this article, you’d specifically learn how to write dollars and cents on a check to reduce the risk of a bouncing check or worse fraud.

How do you write a check with dollars and no cents?

Writing a check with no cents is fairly common as many major payments such as writing a check to your landlord. This requires usually whole dollar amounts without cents.

If you want to write a check with zero cents all you have to do is simply put 00/100 or ××/100 in the place you’d usually write the cents. This field is used to determine the value of the check if there is a difference between the number amount and the amount written in words.

If you didn’t understand that then this should help. Writing check amounts in number in the box to the right of the ‘pay to the order of’ line.

You’ll notice this box already has a dollar sign either in or just outside of the box. Due to this fact, you won’t have to write a doll or sign for the numerical amount of the check. Instead, just write the amount in this case 150.00.

The next thing to do is to write the amount of the check-in words on the line that ends with dollars. Since we are writing a check for zero cents, you’ll want to write 00/100 at the end of the dollar amount to specify the check is for zero cents.

It also helps to fill in any blank space with a line through the middle of the space so no one can alter the amount the check is for by adding additional words.

How do you write a check with Cents only?

Writing a check to someone when you owe them 30 cents might be confusing. This might leave you in a position where you have to write a check for cents only.

Mong forward, I think you’d like to know that writing a check involves two critical sessions of your check: the number box and the number line.

RELATED:  Betterment Rate Of Return In 2022: Is It Worth Investing In?

The number box is near the top, to the right side of the line that says “Pay to the order of”. It would have a little dollar sign printed inside it or right next to it. You are meant to enter numbers here. No need to enter another dollar sign because that’s already taken off for you.

Do include a decimal point because this indicates that you are writing the check for only cents when the numbers appear directly to the right of the dot.  For instance, you would enter 0.30, using the example of that 30 cents you owe.

The number line acts as an added precaution to ensure that the amount you are writing on the check can’t be altered. You’ll enter the number here the only difference is it would be in words and not numbers.

The number line is right beneath the” pay to the order of” line runs from side to side across the whole. The word ‘Dollar’ should be printed at the end of the line on the right side.

Any of these options clearly state that no dollar should be transferred with this check. You should also draw a line after your words to the other side of the check to ensure that no one can write anything else in there.

In the ‘pay to the order of’ line fill in the payee information that is the business name or first and last name the money goes to and on the line write one thousand and 00/100 as far to the left on the line as possible and write 1000 in words and the 00/100 cents in numbers as stated.

RELATED:  How To Buy Apple Stock Direct In 2022 | Step by Step Guide

In numeric form, as required in the check put 1000.00 in the box right after this $ sign on the same line. Make sure to include the decimal 00. This box can be found on the right-hand side of the check-in corner.

Steps to writing a check with dollars and cents

#1. Fill in the amount box with a numeric amount

The amount box is located on the right side of the check below the ‘Date’ line and to the right of the ‘Pay to the order of’ line.

It has a symbol on the left side showing currency- $ or £ in this box, the amount should be written using numbers. Don’t separate the dollar amount and cent amount using decimal point 1000.50.

#2. Include the decimal and cent amount even if the amount is in even dollars

#3. Fill in the textual amount

You should know by now a check has a space to fill in your amount in words. Just underneath the  ‘Pay to the order of’ line, you will see a second line that has the currency written out at the end of it.

On this line, just write the amount in words. The dollar is written out in words and the cents amount is written as a fraction out of 100. Some people choose to draw a straight horizontal line after the fractional cent amount to fill the line forty-seven dollars and 50/100—–.

This prevents other people from adding to or changing the amount you write.

Compound numbers do not fall evenly on decades (ten, twenty, thirty), centuries (one hundred or two hundred and so on.

#5.  Write Out the textual Amount

Do not be bothered by the amount even if it is large. An amount for several hundred, thousands, or even million dollars should be still be written out in words on the appropriate line.

#6. Proceed to fill out the non-monetary.

#2. Pay To The Order Of (Payee Name): In this line, write the full name of the payee or recipient. This can be an individual’s first name and then the last name, or it can be the name of an organization. Note: make sure you spell the full payee name correctly.

#3. Amount In Numeric Form (Dollar Box): Write 1000.00 in the dollar sign payment box. Don’t forget to write a decimal point between the dollars and the cents.

#5. Signature: Now, Sign your name on the line at the bottom right corner to authorize the transaction

#6. Memo Line (For): In the end, write the reason for the check, on the memo line in the lower left-hand corner. It’s usually helpful to write a note to remind you later what this check was for.

Writing a 1000 check as well as a check with dollars and cents can be tasking but it’s not that hard. The secret is to keep calm and breathe