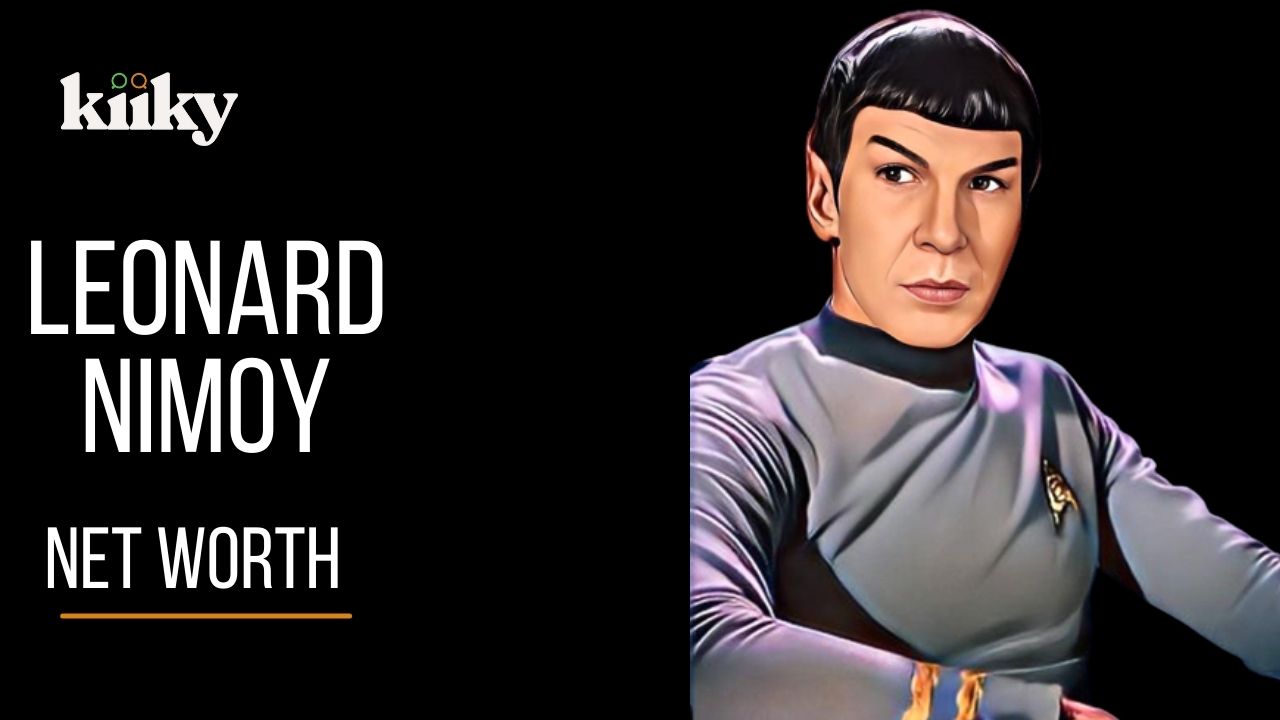 Leonard Nimoy’s net worth at the time of his death was $45 million and this is barely startling considering how famous he got from playing Spock in the original “Star Trek” series. He was an actor deep down in his soul and this showed in the way he interpreted all the roles he ever played.

Right up until his death, Leonard Nimoy tried to always be as energetic as can be with him portraying this carefully in interviews that he gave and so on. Despite being unprepared for the realities of fame, Leonard Nimoy’s networth is evidence of the fact that you can get it if you work for it.

Deep down in his soul, he was an actor. He moved to Hollywood as a teenager and continued to pursue his dream of being an actor for at least 15 years.

He received a lot of tiny parts, but he couldn’t support his family as an actor, so he drove taxis and cleaned fish tanks in doctors’ offices. In addition to that. I have no doubt that if he hadn’t received the Star Trek part, he would have continued to play minor roles.

Leonard Nimoy was completely unprepared for the reality of fame when he was cast as Spock. He needed to relocate and obtain an unlisted phone number. He also fought with network executives, who had not anticipated the popularity of the Spock character.

So, despite the fact that he was loving the show and finally generating money, there was a drawback. He was concerned that the show would finish and he would be broke again, so he took advantage of his celebrity and worked himself to exhaustion, making appearances across the country.

Despite their terrible talents, he and Shatner, who was in a similar financial situation, made record albums. In his writings, he has stated that his fame at the time was ultimately unsatisfactory. Of course, no one anticipated the show taking on a life of its own in syndication.

Leonard Nimoy who played Spock became very popular because Spock was pulled between two worlds and couldn’t seem to find a place in either. He was a misfit. The Star Trek audience found this to be very relatable, and fan mail flooded in.

Leonard Simon Nimoy was born in Boston, Massachusetts on March 26, 1931. His parents immigrated to the United States separately from what is now Ukraine but reunited once they arrived in the United States.

Dora was his mother’s name, and she was a stay-at-home mom, while his father, Max, ran a barbershop in Boston. Nimoy grew up alongside his older brother, Melvin, in a Jewish family.

From a young age, Nimoy worked a variety of odd jobs to help support his family. He did things like set up chairs in cinemas, sell newspapers, and shine shoes, among other things. Leonard also began acting at the age of eight, when he began appearing at the local community theater.

He earned a role in the theater performance of “Awake and Sing!” at the age of 17, which further sparked his interest in performing. Working on local radio shows and voice-acting Bible stories earned him a reputation for his voice.

Nimoy began attending theatre lessons at Boston College before moving to Los Angeles to study at the Pasadena Playhouse, however, he left after six months because he believed he had acquired more advanced material elsewhere. He studied photography at UCLA and became devoted to method acting, particularly Konstantin Stanislavsky’s theories.

Nimoy spent more than a decade doing minor roles in B movies, with the exception of the main role in one. He also had a modest TV role. He thought that playing the title character in Kid Monk Baroni in 1952 would make him a star, but the picture failed after a brief run.

He appeared in almost 50 B films, television shows including Perry Mason and Dragnet, and serials like Republic Pictures’ Zombies of the Stratosphere (1952), in which he played Narab, a Martian. He did various jobs to support his wife and two children, such as delivering newspapers, working at a pet shop, and driving cabs.

From the first TV episode in 1966 through the film Star Trek Into Darkness in 2013, Nimoy was best recognized for his portrayal of Spock, the half-human, half-Vulcan character he played on Star Trek.

Most movie fans, supporters, and critics agree that it was Nimoy’s “most important role,” while others later commended him with giving “dignity and intelligence to one of science fiction’s most revered characters.”

The character became well-known and is now regarded as one of the most popular aliens ever shown on television. Spock’s “coolness, knowledge, and ability to take on any assignment successfully” were praised by viewers, according to Fischer. As a result, Nimoy’s character “caught the public by storm,” nearly surpassing William Shatner’s performance as the series’ star.

In 1954, Nimoy married actress Sandra Zober, with whom he had two children, Julie and Adam. Nimoy left Zober after 32 years of marriage, and the couple divorced in 1987. In 1989, he married actress Susan Bay.

He was a family man who, especially in the later years of his life, was deeply involved in the lives of his grandchildren. His son wrote an autobiography in which he discussed the principles instilled in him by his father and the role he played in his upbringing.

Nimoy was an engaged member of the Jewish community throughout his life. A man who both believed and practiced his faith. His parents were Russian immigrants to the United States, and their experience influenced him as a young man, and they stuck with him. He was probably more or less open about it over time.

He blended his religious views into his art by narrating a documentary about Hasidic Orthodox Jews and photographing a Kabbalah session. His Rabbi praised him as a man of faith and a member of his Temple when he died. He was also a private pilot with his own plane.

A look at Leonard Nimoy’s net worth of $45 million and one would expect a long list of luxury items to his name. His luxury items include his houses and his plane. As a person of the Jewish faith, he gave a lot to those in need around him, and that in itself is a luxury many cannot afford.

RELATED:  Who Are The Highest Paid Clinical Psychologists? | Top 10 Countries In 2022

Here are some awards and achievements of Leonard Nimoy;

Towards the end of his life, Leonard Nimoy’s net worth could not save him from everything. After a protracted struggle with chronic obstructive pulmonary disease, Nimoy died in 2015. (COPD).

What is Leonard nimoy’s age?

Leonard Nimoy was 83 years old when he died on February 27, 2015. He died of COPD complications and was buried at Hillside Memorial Park Cemetry in Los Angeles.

Does Leonard Nimoy have any children?

Leonard Nimoy had two children with his first wife Sandra Zober who he married in 1954. Their names are Julie and Adam Nimoy.

Who is Leonard Nimoy married to?

Leonard Nimoy was married twice. First to his ex-wife Sandra Zober and then to Susan Bay after his divorce in 1987.

What is Leonard Nimoy’s net worth?