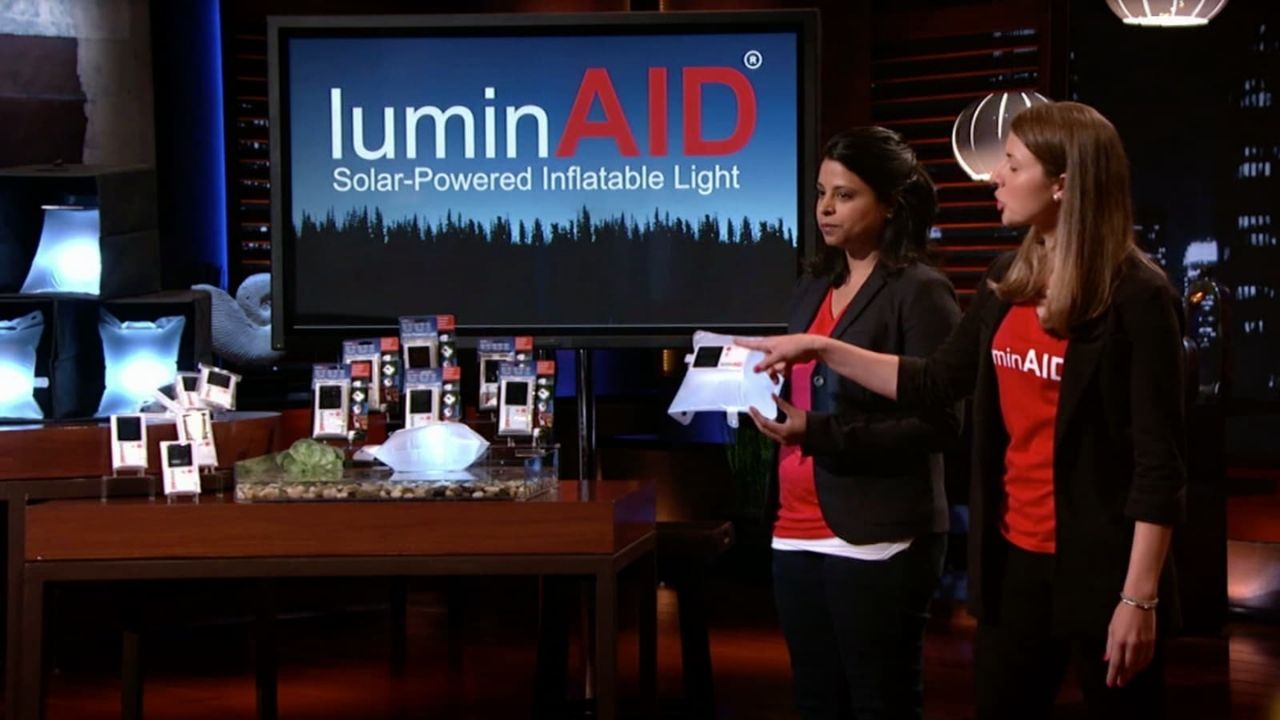 LuminAID creates cutting-edge solar-powered humanitarian aid and outdoor entertainment items. The LuminAID light, the company’s initial product, is a solar-powered, inflatable lamp that folds up and inflates into a lightweight, waterproof lantern perfect for outdoor leisure and emergency scenarios.

Individuals in more than 30 countries have purchased the LuminAID light, and outreach efforts with NGO partners have placed more than 10,000 donated lights in more than 50 countries, including Haiti, Nepal, and the Philippines. Shelterbox, Doctors Without Borders, and numerous UN agencies have received LuminAID lights for distribution on the ground during catastrophes and in refugee camps.

LuminAID was featured on ABC’s Shark Tank earlier this year, receiving proposals from all five Sharks and striking an agreement with billionaire investor Mark Cuban. The 2-in-1 power lanterns from LuminAID are developed for use in disaster assistance and are built to resist harsh environments. These waterproof and dustproof lanterns, which include an integrated phone charger, satisfy all of the demands of portable energy as a light, phone charger, and solar panel.

LuminAID lights are designed and manufactured by LuminAID Lab. The firm was formed in 2011 by Anna Stork and Andrea Sreshta, who devised the technique in 2010 while at Columbia Graduate School of Architecture, Planning, and Preservation in response to the 2010 Haiti earthquake.

They later witnessed firsthand the devastation caused by large-scale disasters when on a school trip to Japan in March 2011. Its creators recognized its potential as an outdoor recreation accessory in the United States and began marketing it as such. Its introduction was tied to Indiegogo in an agreement whereby consumers could either buy two for $25, with one unit delivered to a poor nation or buy a single device for $10 to be donated.

LuminAID’s website now includes 9 different solar lanterns for sale, as well as a solar speaker, as of July 2021.

Sales have increased from $1 million in 2014 to $2 million in the first nine months of 2015, according to Sreshta. Furthermore, LuminAID’s “Give Light, Get Light” project, in which customers buy one light for themselves and contribute another to a charity, has donated over 13,000 lights, including 3,000 last year through non-governmental organizations (NGOs) as part of the Nepal earthquake relief efforts.

LuminAID lights are designed and manufactured by LuminAID Lab. Despite the fact that this firm has been in existence since 2011, there are no records of its worth for the previous 5-10 years.

The firm is still in operation as of June 2021, with yearly revenues of $1 million. They’ve distributed over 150,000 lights to those affected by various natural catastrophes.

As a company, its goal is to assist individuals all across the world. They have a new product that lasts 30 hours, and since appearing on the show, their sales have increased from $1 million to $2 million. They just went to Malawi with Shelter Box on a humanitarian mission, where they distributed lights. They’ve distributed 50,000 lights in over 50 nations affected by calamities since their debut.

Recommended: 20 Best Gifts Ideas for a Loved One in Quarantine

Luminaid has about 10 employees spread through different aspects of the company with the majority of the staff being part of the marketing sector while the other staffs are part of entrepreneurship, business development, arts, and design, and also support.

Some of the company’s competitors include Bboxx, Easy Solar, balisya trading, and Vapco Inc

The LuminAID light has a solar panel, rechargeable battery, and a multi-chip LED light. It can provide 35 lumens for 8 hours or 20 lumens for 16 hours after a full charge, according to its creators, and the battery can be recharged 500 times for years of usage.

Several business contests have awarded the product first prize, including the $100K Midwest 2013 Clean Energy Challenge, the William James Business Plan Competition, and the Chicago Booth School of Business Social New Venture Challenge. The technology is now patent-pending in the United States and worldwide under the Patent Cooperation Treaty.

LuminAID has been a frequent visitor to Shark Tank as it expands its retail offerings. Sreshta said she loved highlighting the company’s disaster-relief activities during the company’s January 2016 update appearance on the show, which included footage of the company’s charity work distributing lights in flood-ravaged Malawi.

Andrea Sreshta is a co-founder of LuminAID and a second-year student at Chicago Booth’s Full-Time MBA Program. In 2013, the Clean Energy Trust in Chicago and the US Department of Energy awarded the company the $100,000 Early Stage Prize; in 2012, it was named the winner of Booth’s John Edwardson Social New Venture Challenge; and in 2014, it was awarded a Toyota Mother’s of Invention Grant at the Women in the World Summit.

Andrea formerly worked in the design and architectural fields and studied them. Prior to entering Booth, she received a bachelor’s degree from Yale University and a master’s degree in architecture from Columbia University.

LuminAID Lab is co-founded by Anna Stork. At the Kauffman Foundation for Entrepreneurship, she was named a Kauffman Global Scholar in 2012. She worked as an Operations Intern at Warby Parker, a retail start-up, as a Kauffman Fellow. Anna has also worked for the Department of Defense in product development, with an emphasis on developing innovative technology for military personnel in distant regions. She graduated from Dartmouth College with a B.A. in Engineering and Studio Art and a Master’s in Architecture from Columbia University.

SEE ALSO: What is Business Acumen? How Does It Work?

Apart from the founder and co-founder of luminAID which are Andrea Sreshta and Anna Stork, there is no present CEO in the company.

Future of the Company

LuminAID is launching two new products, including a color-changing light for use in backyards and on patios, as well as variants that emit higher-powered light and charge phones using the LuminAID’s solar capacity. The firm has also grown from a two-person operation manned completely by the partners to a four-person full-time crew, plus two interns and a slew of subcontractors.

The LuminAID light has quickly become a favorite among outdoor adventurers while also assisting disaster-stricken communities all over the world. LuminAID makes a solar-powered, inflatable light that folds up and inflates to produce a portable, weatherproof lantern. The LuminAID gives up to 16 hours of LED light and can be simply recharged in the sun, making it suitable for use outside or as an additional light source in the house.

Anna Stork and Andrea Sreshta founded the business in 2011, after developing the approach in 2010 at Columbia Graduate School of Architecture, Planning, and Preservation in response to the 2010 Haiti disaster. Luminaid employs around ten people that work in various departments. They’ve given out over 150,000 lamps to people who have been devastated by natural disasters.

The company’s first product, the LuminAID light, is a solar-powered, inflatable lantern that folds up and inflates into a lightweight, waterproof lantern ideal for outdoor pleasure and emergency situations.

What is the net worth of LuminAID?

As of June 2021, the company is still in business and has revenues of $1 million annually. They’ve given away over 150,000 lights to people in the aftermath of a variety of natural disasters.

How much did Mark Cuban invest in LuminAID?

Mark Cuban put up $200,000 towards the venture. After five bids, the LuminAID co-founders found themselves in a place in the Tank that only a few people get to experience. They eventually accepted Mark Cuban’s offer of $200,000 for a 15% interest and the opportunity to head the next fundraising round.

Did LuminAID get a deal on Shark Tank?

In 2015, LuminAID was featured on ABC’s Shark Tank, where it received proposals from all five “sharks” and agreed on a deal with billionaire investor Mark Cuban.

When did LuminAID appear on Shark Tank?

For how long does LuminAID last?

On a single charge, the light may last up to 24 hours.