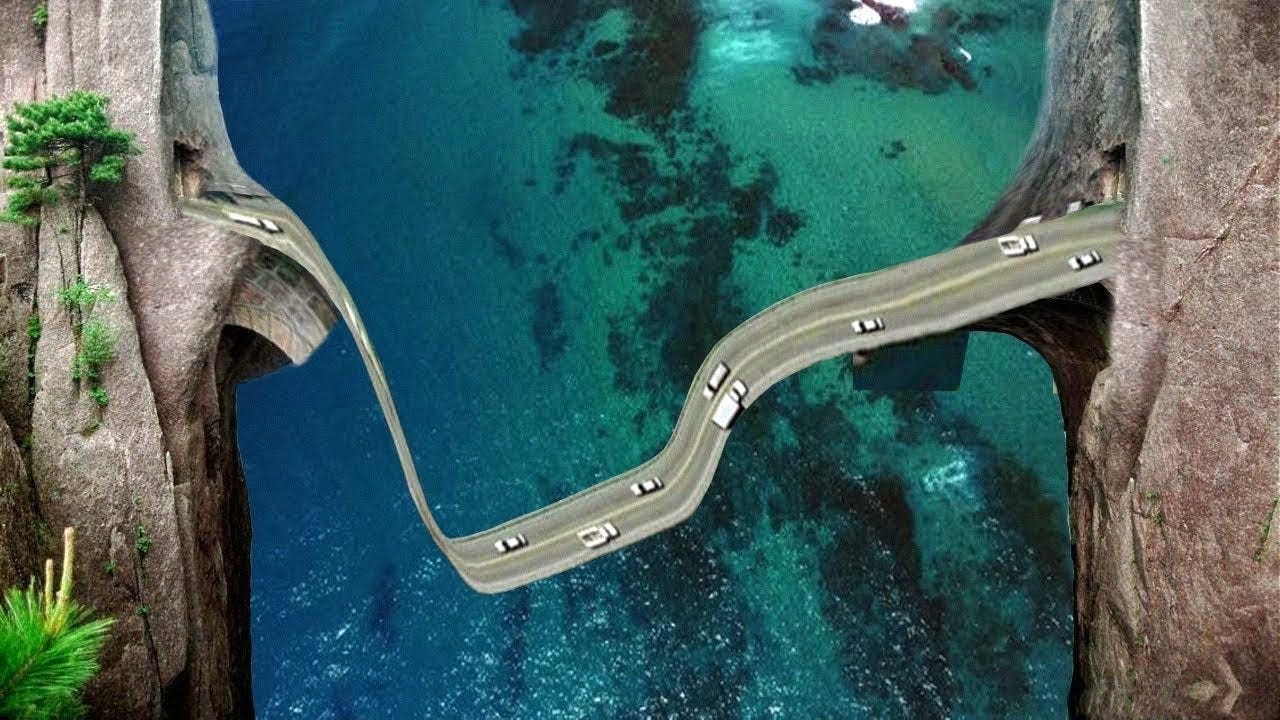 What have you heard about bridges?

How do you feel crossing or driving across one?.

Do you think it is an exaggeration for some bridges to be referred to as the most dangerous bridges?.

I have had my own fair share of experiences with bridges, both the good and bad, which I do not hesitate to share every time.

As a child, I always loved it when my parents drove me across the bridge, especially on water. I loved the feeling, it gave me much excitement, so much that I was always ready to share experiences with kids in school the next day at school or whenever I had the opportunity.

The thrill continued until one day, I got home from one of those trips with my family and watched news of how that particular bridge had broken and caused an accident that claimed the life of many.

An acquaintance was affected and afterwards, every time we (my family and I) drove past a bridge, I would always get chills down my spine. I always feared that it was going to break suddenly like the news I had heard.

Many years later in high school, I was given a research topic on finding out the most dangerous bridges in the world and I got scared of bridges the most.

That is not to say that all bridges are dangerous, or that they do not have their own importance; but you know this thing they say about one experience defining your reaction towards the same experience?. Yeah, that’s it.

Now, let’s delve right into some fun facts about the most dangerous bridges in the world. However, we should start with the longest bridge across the water.

What is the longest bridge across the water?

Over time, there have been speculations about which is the longest bridge across the water, Lake Pontchartrain or Jiaozhou bay bridge.

Lake Pontchartrain is found in Louisiana, holding a maximum length of 64km, dating back to 1699.

Jiaozhou bay bridge on the other hand is located in China with a length of 26.7km, dating back to 2011.

Comparing the length of both bridges, it is safe to say that Lake Pontchartrain is the largest bridge across water.

Sometimes, I wonder who put both bridges up as to which is the longest.

The difference between both lengths is crazy, right?.

In the course of this post, have you been wondering what the steepest bridge in the world is, or what it would look like?.

Now, let’s take a look at it together below:

What is the world’s steepest bridge?

Eshima Ohashi is so steep that it looks like a rollercoaster.

Although, it looks pretty steep owing to the images of it on the internet, it still doesn’t negate the fact that it is terrifyingly high with a gradient of 5.1% on the Tottori prefecture side and a 6.1% on the Shimane prefecture side.

One of the importance of bridges is to provide border security. Having known this, do you think there is such a thing as a weak bridge?.

This moves us to the next question, the weakest bridge in the world.

What is the weakest bridge in the world?

According to the ARTBA bridge report, there are over 47,000 bridges that are structurally deficient  which need to be repaired immediately.

However, the one that is most deficient is Florida’s Pensacola Bay Bridge, United States.

Now, to the crux of the matter, find out which bridge is the scariest in the world.

What is the scariest bridge in the world?

There are many speculations as to which bridge is the scariest in the world. Reports, research and writings have come up with what they think is the scariest.

But then, have you seen the Hussaini Suspension Bridge? Oh yes, it is dangerous. The bridge is made of ropes and planks and has 399 steps from one end to the other.

Although seemingly dangerous due to shakiness and wide steps, many experts say that it is quite safe and secure.

An interesting fact about the Hussaini bridge is; it is believed to have been washed away in a 2011 moon storm.

Now, let us take a look at the top 10 most dangerous bridges in the world before we wrap up these scary notes, lol.

Read: How To Be More Confident: 15 Best Tips To Do

Top 10 Most Dangerous Bridges In The World In 2022

Here are the top 10 most dangerous bridges in the world, 2022, in no particular order.

These bridges, three in number, are made of vines, wire, and small plank wood with big spaces between them.

Climbers usually experience swinging and bouncing which makes it a little bit scary.

Research has it that animals also climb these bridges too which makes it even more dangerous. Iya Valley is about 100ft high and 1,000ft long.

A similarity between this bridge and the aforementioned is the fact both humans and animals cross the bridge.

Other features that make this bridge one of the most dangerous bridges aside from the thrill of crossing the bridge with an animal are its extremely tight condition and the shaky experience of crossers when using the bridge.

It is said that many people use the bridge daily, thereby leaving it in a poor state.

The bridge is made of ropes and wooden planks that have wide gaps between them. Not only that, even the ropes are rotten.

I’m sure you don’t want to ever go to the Hussaini bridge.

Although built in 1935 for trade and economic purposes, the deception pass bridge becomes dangerous during heavy wind and storm as drivers can barely see the road when they get to the middle.

What is dangerous about the deception pass bridge is the waters below, with its very strong, rolling currents, that have caught many ships unawares and destroyed through the years.

According to the name, which makes the bridge one of the most dangerous bridges in the world is the fact that it is being haunted.

Built in 1916 and located in Illinois USA, the witches bridge is about 104ft long.

The Quepos bridge also known as the bridge of death looks like it can crumble at any moment, with the loose slats of the roadway clunking loudly when trucks drive over it.

RELATED:  Best Answers to "sell me this pen" Question in an Interview

What makes it even more dangerous is how the bridge shakes whenever vehicles pass over them.

7. Most haunted bridges in Illinois, USA.

It is said that these bridges are places where ghosts of long forgotten accidents still roam. Phantom voices also cry out from the water below.

The Sangwali bridge is located in the Mamili National Park in Northern Namibia and is 138m long.

The bridge is extremely dangerous that it can be washed out any time.

The Austrian road, so called because it was built by Austrian POWs during the world war in 1915, is a marvel of engineering located in the Altai mountains of East Kazakhstan.

The road includes 16 wood bridges over the Kara-Koba river. The bridges are suffering severe rotting and some of them have already collapsed.

We saved the best for the last. Located in Siberia, the Vitim river bridge is one of the most dangerous bridges in the world. During the Siberian winter, the bridge becomes even more challenging as the wood turns into an ice slick that provides no traction.

Surviving the bridge crossing is considered such an accomplishment that the 34 people who have done it created their own Facebook page to that effect. Vitim River Bridge is barely wide enough for one car and has no railings.

It is made of wood and not in very good condition. It will take 3 minutes to drive across if you’re a skilled driver.

Personally, I think all the mentioned bridges are truly dangerous. There were other dangerous bridges on the internet but I found these most dangerous.

Which of these bridges would you like to step foot on?.

Which bridge do you think is most dangerous?.