If you are considering becoming an actor and actress, attending a reputable school can be a great advantage. Canada is one of such destinations where you can have access to some of the acting Schools. In this writing, we should consider the 10 Best Acting Schools in Canada.

The Canadian College of Performing Arts is one of the best Acting Schools in Canada and they offer two intensive one-year certificate programs, as well as a half-year diploma program for advanced students.

The total enrollment for year I and year II is approximately 60 students. Selected students may be eligible to enroll in the Enriched Performing Arts Certificate after successfully completing their first year of study.

Graduates of this program now star in the West End of London and have appeared in major productions around the world, including the Stratford Shakespeare Festival, the Charlottetown Festival and more.

In their third year, the students of a theater group and set up three performances with the guidance of the invited directors.

After its beginnings to the famous Second City of Chicago, the Toronto Second City Training Center has become the largest improvisation and comedy school in the world as well as one of the Best Acting Schools in Canada.

In addition to its conservatory program for aspiring professionals, Second City offers on-demand classes for adults, as well as camps and courses for children and adolescents in grades 2 through 12.

For students preparing for a professional career in improvisation, writing, acting or comedy, the Conservatory Program is a 12-month program that explores improvisation methods developed in the Second City over the past 50 years.

RELATED:  15 Scholarships for Chad Students To Study in Canada 2022

The conservatory students go through six levels of study, and each three-hour class is held once a week for seven weeks. Upon graduation, students will have created an original Second City-style magazine with sketches, songs, and monologues. Students of the Conservatory Program are expected to perform at their class shows.

Adult classes cost $280 per quarter; Students who sign up for multiple classes are eligible for a discount. A $15 membership is required for all new students.

Rates vary for summer camps and programs for youth and teens.

Established in Montreal in 1960, the National Theater School of Canada is one of the few coilingual theater schools in the world that offers professional training in English and French. It has a place among the best Acting Schools in Canada.

Around 200 full-time and part-time industry professionals teach and advise approximately 160 students, with a maximum of 12 students per class.

On the last Saturday of September, the National Theater School opens its doors to the public for an open day during the annual Journées de la culture festivities.

Prospective students can learn about school training programs, take part in special events and meet current students and alumni. The next open day will be held on September 29.

The Vancouver Film School is one of the best Acting Schools in Canada. It offers two acting programs: an essential four-month acting course and a one-year acting program for film and television.

Toronto Academy of Acting and Film & Television School is recognized as one of the best film schools and offers training in diploma programs for film acting and film and television production.

Toronto Academy of Acting for Film & Television is the only film school and acting school that has access to all film and television projects throughout Canada, making it one of the best film schools in Canada.

The programs and courses of film schools and acting schools are presented to acting students and film students with a friendly and challenging environment to train in various film acting courses, digital film making courses and vocational programs of Full-time diploma both in film acting, film television production program.

Next on the list of the best acting schools in Canada is the School of Motion Picture Arts at the University of Capilano.

This school is one of the best acting schools in Canada that we recommend for students who wish to pursue a career in acting.

However, they offer programs that include cinematographic arts, 2D animation and visual development, 3D animation for movies and games, costumes for stage and screen, digital visual effects, documentary, and indigenous independent digital cinema.

This school was established in 1965 and emphasizes real-life learning in collaboration with theoretical aspects of the classrooms. However, Simon Fraser University students are exposed to great opportunities to deepen their understanding of other fields of the arts.

Covered courses include the production of real productions with established professionals and instructors.

University of British Columbia Department of Theatre and Film

This is one of the best acting schools in Canada, where you can get a quality education. Founded in 1908, the school has proven to be among the top 20 public universities in the world and the top three in Canada.

However, there are a large number of degree courses in the field of theater and film that are offered at the school in the programs available in the undergraduate and graduate degrees of the UBC, where they combine theories with real-life practices.

It was founded in 1963, Windsor University is one of the best acting schools in Canada. Offering graduate and undergraduate programs in film and television studios with the teachings taken by established professionals in the film and television industries, students can combine the theoretical aspects of the classroom with real-life practice in production.

However, it is also easy to move from being students of these professionals to work with them.

The school was established in 1964 and has an undergraduate program. The fourth-year can be done anywhere, including working in a real-life set for any current production. This is one of the best acting schools in Canada.

However, there are two ways in which production can take, found in the performance sections or productions with topics that cover acting, production, direction, scriptwriting, listening techniques, commercial and professional career, cinematography, sound, digital edition, and production management.

Offering graduate and undergraduate programs in film and television studios with the teachings taken by established professionals in the film and television industries, students can combine the theoretical aspects of the classroom with real-life practice in production.

However, it is also easy to move from being students of these professionals to work with them.

What is the best acting school in Canada?

Vancouver Academy of Dramatic Arts VADA is the best acting school in Canada. That is the word on the street. Casting Directors, Talent Agents, Directors and Producers agree that VADA is the top acting studio around.

Which is the cheapest acting school in Canada?

National Theater School of Canada is considered among the cheapest acting schools available in Canada due to their tuition fee of $4,500 for local Canadian students and $9,000 for international students.

How much do acting classes cost in Canada? 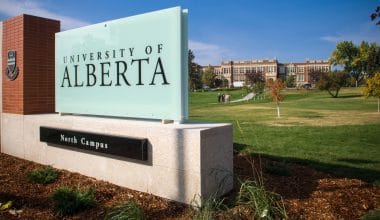 Read More
The Sharp Compliance, Inc. is delighted to invite undergraduate students to apply the essay scholarship for Fall 2016…
SScholarships by Countries

Read More
The Canadian government is delighted to invite applications for the Canadian Government Laboratories Visiting Fellowship Program 2018, this program…
DISCLOSURE: This post may contain affiliate links, meaning when you click the links and make a purchase, we receive a commission.