Duke University is one of America’s universities with great opportunities to offer to students. Get to know more about how to study at Duke University, its tuition fees, scholarships, courses, and ranking.

Here is a little overview of Duke University.

Duke University has academic affiliations with AAU, COFHE, 568 Group, URA, CDIO, ORAU, NAICU, IAMSCU and Sporting affiliations with NCAA Division I FBS – ACC. It has a Suburban/Urban Campus and an official website at www.duke.edu.

Students who want to study at Duke University can pursue a major, and also pursue a combination of a total of up to three including minors, certificates, and/or a second major. Twenty-four certificate programs also are available.

Eighty-five percent of undergraduates who want to study at Duke University 2019 enrolls in the Trinity College of Arts and Sciences, while the rest are in the Pratt School of Engineering. The Faculty Scholarly Productivity Index ranked Duke’s faculty first in the nation in the fields of Oncology and Cancer Biology, Biomedical Engineering and Applied Economics.

The Public Policy, Statistics, Chemistry, Environmental Science, Medicine, and Molecular Genetics departments (among others) all ranked among the top five. Several other departments including Electrical Engineering, Mechanical Engineering and Nursing ranked in the top ten.

Duke is often ranked among the world’s best universities and holds the top-ten position in various national rankings. This makes it the more reason applicants should Study at Duke University. As of 2017, 11 Nobel laureates and 3 Turing Award winners have been affiliated with the university.

According to a study carried out by The New York Times, Duke’s graduates are shown to be the most sought-after and valued graduates in the world. In 2019, Forbes listed Duke among the top American Colleges.

Duke is ranked fifth among national universities to have produced Rhodes, Marshall, Truman, Goldwater, and Udall Scholars. This serves as an edge for foreign nationals to study at Duke University for a conducive environment for learning.

Duke University is ranked fourth globally in terms of primary affiliations. Admission to Duke according to U.S. News & World Report is the “most selective” and according to The Huffington Post, Duke is one of the ten toughest universities in the United States to get into.

RELATED:  Opportunity for Master’s Degree with Scholarship Majoring in Computer Science at University of Jinan, China

In 2022, College vine ranked Duke University as the 2nd best Pre-Med school in the U.S.

From 2001 to 2011, Duke University had the sixth-highest number of Fulbright, Rhodes, Truman, and Goldwater scholarships in the nation among private universities.

About 60 merit-based full-tuition scholarships are offered, including the Angier B. Duke Memorial Scholarship, awarded for academic excellence, the Benjamin N. Duke Scholarship awarded for community service, and the Robertson Scholars Leadership Program, a joint scholarship and leadership development program granting full student privileges at both Duke and UNC-Chapel Hill.

Find out more by clicking the button below.

Duke University has an Acceptance Rate of 10.8%, an elite Admission Standard and a very high Applicant Competition. Academically, Duke University has exceptionally high requirements for admission test scores, generally admitting students who score in the top 4 percent. Last year, 3,430 out of 31,671 applicants were admitted, of which 50% enrolled.

The Duke University Admission is also open to all Aspiring foreigners.

Duke University typically requires applicants to be in the top 3 percent of the SAT test. The school consistently takes SAT composite scores down to 1430 on a 1600 scale, the estimated average SAT composite for admitted freshmen is 1505 out of 1600.

Also, admission data indicates that Duke University regularly accepts students with ACT scores of 31 and above. Applicants submitting an ACT composite of 32 and above have very competitive chances. The Tuition Fees at Duke University is about $53,744.

Duke University offers 53 majors, 52 minors, and 23 certificates. With the ability to create combinations of the three, you have 437,989 unique academic combinations available. Students have to declare a major by the end of their fourth semester to create their own major (through Program II).

One major is required for graduation, and most students take advantage of Duke’s curricular flexibility to pursue a second major, minor(s), or certificate(s) in addition to their declared major as the Duke University Admission is basically open for all foreign nationals.

Find out All you need to know about Duke University Executive Education | Programs, & Cost

The Majors offered at Duke University include:

The Minors offered at Duke University include:

The certificate programs that are offered to students who study at Duke University include;

The arena used for the mist of their games is the Cameron Indoor Stadium in Durham, North Carolina. The team’s uniform Colors are Duke Blue and White. The Duke University basketball team has won 5 NCAA Championships, has appeared in 11 Championship Games (third all-time), 16 Final Fours (fourth all-time) and has an NCAA-best .755 NCAA tournament winning percentage.

Duke Blue Devils have been the Atlantic Coast Conference Champions a record 20 times and lay claim to 19 ACC regular-season titles. Prior to joining the ACC, the Blue Devils won the Southern Conference championships five times.

The Duke Blue Devils have finished the season ranked No. 1 in the AP poll seven times and is currently tied with UCLA in total weeks ranked as the number one team in the nation by the AP with 121 weeks. Also, the Blue Devils have the second-longest streak in the AP Top 25 in history with 200 consecutive appearances from 1996 to 2007.

As a result of such success, ESPN, in 2008, named Duke Blue Devils the most prestigious college basketball program since the 1985–86 season, citing that “by any measure of success, Duke is the king of the hill in college basketball in the 64-team era of the NCAA tournament.” And since that designation, Duke Blue Devils has gone on to win two additional national titles in 2010 and 2015.

The Duke University alumnus students have an interesting profile. Most of them have gone on to become leaders in government offices, business enterprises, and academia. Some notable alumni of Duke University include;

Mary Elizabeth Alexander Hanford “Liddy” Dole, born on July 29, 1936, is an American politician and author. She served in both the Ronald Reagan and George H. W. Bush presidential administrations, as well as in the United States Senate North Carolina from January 3, 2003, to January 3, 2009.

Elizabeth Dole graduated with distinction in Political Science, on June 2, 1958, from Duke University. She was a finalist for an Angier B. Duke Scholarship, a full-tuition award given to outstanding applicants who matriculate at Duke.

She has also spoken at Duke several times, and in 2000 Dole was awarded an honorary degree, Doctor of Humane Letters. She was a recipient of the Algernon Sydney Sullivan Award.

Nick Joe Rahall II, born May 20, 1949, is an American former politician and member of the Democratic Party. He is the longest-serving member ever of the United States House of Representatives from the state of West Virginia, having served from 1977 to 2015.

Frank Lee “Skip” Bowman, born on 19 December 1944 is a retired four-star Admiral. He is the former Chief of Naval Personnel and former Director of Naval Nuclear Propulsion.

Read More
MaleSensePro is inviting applications for the MaleSense Pro Internet Marketing Scholarship Program. To be eligible, candidates must be…
IINTERNATIONAL SCHOLARSHIPS 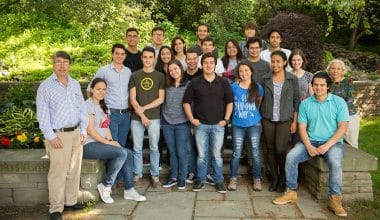 Read More
Do you wish to study in Colombia? We compiled a list of top universities in Colombia with their…
DISCLOSURE: This post may contain affiliate links, meaning when you click the links and make a purchase, we receive a commission.