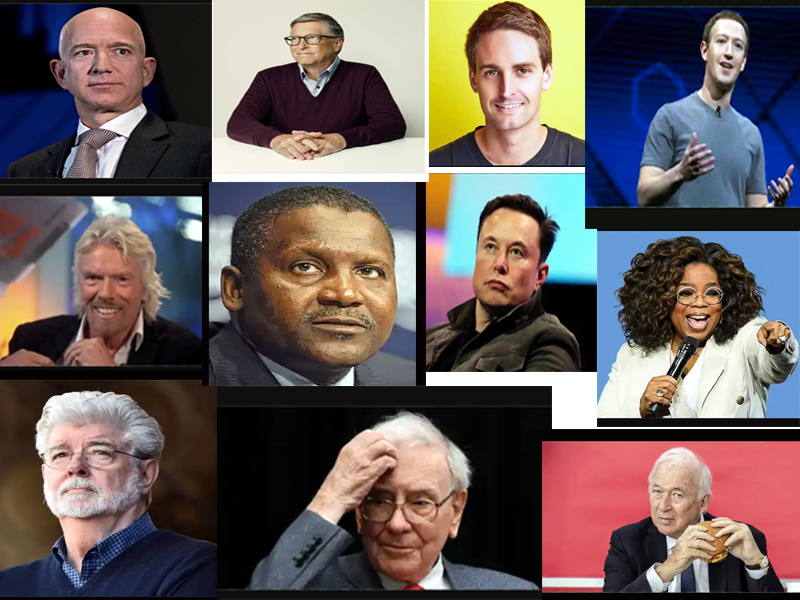 Are you an entrepreneur seeking to climb to the top in the strata of the world’s famous billionaires? Do you wish To Join the circus of billionaires? Then pay attention as we highlight on “How these 11 Billionaires made their first million in the entrepreneurial world.

It may also interest you to know that 65% of the 100 richest people are self-made but what should be your interest is not how long and the processes it took these wealthy entrepreneurs to hit their very first million but how they made it.

Before the full highlight, please hit the subscribe button to subscribe and get more notifications on our next video and tips on being a successful entrepreneur.

It took three years for the Amazon’s founder and CEO to hit the milestone in his early 30s. He became a self-made millionaire in 1997 at age 33 when Amazon’s business fetched him $54million. At the age of 35, he attained to the status of a billionaire.

Today his estimated net worth is $43.5billion. How did Jeff Bezos become this rich and successful? However, he did not rise to this position until he sort to be a media proprietor and in 1994 he made an internet-based enterprise that sells books, music, movies, housewares, electronics, toys, and many other goods to both retailers and consumers in his garage at Seattle.

Today, that internet based business venture is the largest in this niche.

Bill Gates is Microsoft’s co founder and became a self-made millionaire in 1981. It took him six years to make his first million at the age of 22. Today, Gates is the richest man in the world. Gate, one of the old and common names in corridor of world’s billionaire had to crawl before he walked. His road to success began as a tech-obsessed 13-year-old student at lakeside school in Seattle.

He however, became a software developer and wrote his first software at this age. In his days of Harvard, he and his hometown friend Paul G. Allen developed software for the microcomputers adapting basic, a popular programming language. Gates dropped out of Harvard to form Microsoft. Today, he is a known investor and philanthropist.

RELATED:  Starting A Business After College | 10 Avoidable Mistake To Look Out For In 2022

The Facebook cofounder and CEO became a millionaire in 2004 at age 22 from his site. Facebook is now the most dependent and reliable social media platform which over 2701 million users.

Mark’s site, Facebook went live in June 2004 starting from his apartment.  Before the end of the year, the site has arrived at one million clients. Facebook possesses more than 375 million users and has served as one of the major social online platform with its major objective of bringing the world closer together.

Moreover, this objective in mark’s mind turned him into an internet entrepreneur and a creative guru. Today, the creative venture has fetched him not only his first million but made him a billionaire with Today’s net worth of $43.9billion.

Spiegel created Snapchat with his classmate at Stanford University. In his sixth grade, the young tech boy built his own pc.

In 2011, the disappearing app was launched under the name Picaboo but was changed later to Snapchat. By mid-2013, Snapchat had nearly 60 million downloads and valued at $800 million.

At age 23, the Snapchat cofounder and CEO became a millionaire in 2013. As of today he remains one of the youngest and most successful founders in tech and has an estimated net worth of $4billion.

Branson is Britain’s high-profile billionaire. At 16, he ventured into his first business by creating a magazine called Student and set up a mail-order record business. Apparently, he opened a chain of record stores.

Branson owes his fortune to a conglomerate of businesses bearing the virgin brand name in 1972. The virgin group controls more than 400 companies in various fields and employs nearly 70,000 people in 35 countries.

Branson earned his first million in 1973 at age 23 from the virgin megastores. His net worth today is $5.1billion.

Musk is the co founder of PayPal and Tesla Motors and founder of SpaceX. Musk said that one of the keys to his success is taking risks. Musk and his brother Kimbal founded Zip2 Corporation to provide city guide and directory software to newspaper.

RELATED:  How to Start a Photography Business in 2022 | Full Guide

However, the young entrepreneur at the age of 27 became a self made millionaire when he sold the company to Compaq Computer Corporation for over $300 million. Today, his estimated net worth is $10.8billion.

Winfrey joined the TV world at the age of 19. Her success in the TV business catapulted her to feature in movies which got her awards. At the age of 32 became the media mogul and queen of daytime television. By 1995, her net worth had bloomed to $340 million, making her the richest woman in entertainment.

She became a self-made millionaire in 1986 and equally the first black woman billionaire in history at age 49 in the year 2003. Today, the entertainment tycoon estimated net worth she is above $3billion.

The outstanding movie director made a hit into the world of the rich man through movie production. His first directorial debut was 1971’s THX 1138, but his next movie in 1973 “American Graffiti fetched him profit and his self made millions. At age 34, he became a self-made millionaire in 1978.  After the hit in the movie world, Lucas became a hot commodity.

His outstanding idea for what he described as a “western set in space” made him to create the movie “Star Wars” which fetched him great fortune ranging from box office, star wars toys, books, and various other licensing deals.

The production of the film “star wars” helped him make the jump from millionaire to the billionaire at age of 52. Today, his estimated net worth is $4.5billion.

Buffett began his investment journey at the early stage of his life from childhood side-hustles and stock purchases to studying under investing gurus.

At the age of 11, Buffett kicked off a lifetime of investing by making his first stock purchase.  He advanced by forming Buffet Associates in 1956. 10 years later, he has taken the control of Berkshire Hathaway.

Today, he is an investment legend and made his first million investments in a windmill manufacturing company. He became a self-made billionaire by the age of 56 and is currently the third-richest man in the world with an estimated net worth of $60.1billion.

Jack became an extraordinary entrepreneur with a long-term investment in franchised fast food. He made his first million with fried chicken Kentucky Fried Chicken before He advanced to burger sales which he calls the Hungry jack.

Dangote is African richest person and the founder of Dangote cement.  His business kicked off in 1977 and he made fortune by importing and selling agricultural commodities and later through oil and gas.

At the age of 21, he borrowed $3,000 from his uncle for business. His business grew from sales of agricultural commodities, to household goods and to construction products. Today, Dangote group foresees the manufacturing of cement, sugar, salts, four, oil and gas products etc. Dangote’s his net worth is 11.4 billion.

Finally, this review stimulates you to join the circus of billionaires but it is important you learn to ‘Start small’ and expand to the stage you wish for.

These principles are not inherited or peculiar to the above-mentioned billionaires but can be adopted by anyone and used to achieve massive success and wealth.