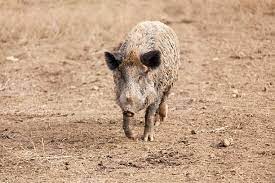 For quite a while now, Hogs have been tagged dangerous to crops, farm animals, or even as game as they are usually possible carriers of disease.

I know with this thought you probably have concluded that these vermin animals are absolutely no good. But, what if you were told you could get paid to hunt hogs?

But it’s true and it’s legit.

Many Americans have made money from hunting pigs, and you can too. Calm your nerves, you won’t be getting into trouble.

This practice has been legalized by lawmakers, so it is as legal as owning a government-approved business.

Wild pigs were first introduced into Texas as far back as the 16th century by Spanish conquerors.

At that time, hogs were being used as food. By the 20th century, however, more pigs were brought into the state.

And with time, the hogs kept reproducing till they reached approximately of over 2.6 million in Texas alone.

Unfortunately, Texas is not the only state with wild pigs living in them; there are others as well. A recent news report revealed that there is a possibility of about 9 million pigs.

In just about two decades, the number of initial hogs has doubled through states in America. For instance, Louisiana houses about five hundred thousand hogs.

This goes without saying that there is indeed a need to eradicate these animals from states in the country, especially the fact that they cause a lot of damage year in and year out.

This can thus be likened to working for the government because you get paid to hunt hogs.

A lot of companies have capitalized on the wild-pig-hunting business, so all you need to do really, is partner with the right ones. When you reach an agreement and hunt the pigs, you get paid.

However, there’s more to know about hunting wild pigs and getting paid.

Can You Get Paid To Kill Hogs?

This was first announced in 2012 as a competition put out by the Texas state government.

The competition was to last for three complete months— October 1st to December 31st.

Clearly, the US government needed help in eradicating wild pigs from the state, and so they called on citizens willing to help, for a reward of $2 per hog.

If you’re still wondering whether or not you can make income from hunting hogs, then yes! You definitely can.

At present, it is still ongoing, but no longer as a competition with a two-dollar reward. You can get paid to hunt hogs and makeup to hundreds of dollars from it.

How To Become A Hog Hunter

Knowing the procedure involved puts you on the right path to discover how you can get paid to hunt hogs.

Before all else, it is advisable to know the regulations— per state— which allows the hunting of wild boars on either private or public lands—or both— and those which do not permit it entirely.

This basic knowledge could save you from getting in trouble with the authorities.

The first skill you must acquire after the necessary knowledge is the skill of tracking hogs.

The ability to be able to detect a hog’s presence and how to track it down is a necessary skill you mustn’t joke with if you want to get paid from hunting hogs.

In a nutshell, if you desire to become a hog Hunter, you must equip yourself with relevant information.

You best believe it, all of these are important. There are times best suitable for hunting wild pigs, as well as suitable locations, and not forgetting suitable procedures.

In all you have to do, focus on being discrete and outwitting the hogs.

Read Also; Dinovite Reviews: Is Dinovite Worth It Or Just A Dog Killer?

How Much Do Hog Hunters Make?

The general rule or objective of any business is to solve a need, or turn a ‘problem point’— for others— into a ‘profit point’— for yourself— right? Well, the same rule applies. You can get paid to hunt hogs and indeed it’s a profitable side (or main) hustle.

Think of this as the fishing profession, for instance. The more your catch, the more you earn, as well as some other contributory factors; perhaps like how rare or difficult to catch that fish is.

It’s basically the same thing with hunting hogs. The minimum you can make on hog hunting is about $120, so it can definitely be more. The greater the need for those wild pigs, the higher your pay.

If this already seems like something you can and would be interested in doing, then let’s look at the ways you can get paid to hunt hogs.

Here are legit ways you can get paid to hunt hogs this 2022. Starting from the least:

You can take advantage of hunting competitions around you and then sign up to participate.

This may not really fetch in a lot of income on the spot, but who knows, it just might be your gateway to more (hunting) opportunities.

If you are an expert (or hog) hunter, then you must also know that there are beginners who need your knowledge and expertise.

While you may not have the luxury of time or energy to host one-on-one training for every interested person, there’s an easier way to go around it.

Thanks to the internet!

All you really have to do is record your process as you hunt— from start to finish— and then post it online, or you could write a blog post on the hows to hunt a hog.

You can as well host an online course or write an E-book. Whichever method you decide to take, you definitely can get paid and make some extra income. The options are numerous, and the profit you can make, limitless.

After hunting down those hogs and perhaps with no intention to sell the entire animal, you can sell its hides and skin and make some reasonable amount of money.

There are traders or organizations who use such products from the pig to make clothes or other items. And sure enough, you’d be paid based on the price you both agree on.

A little hitch to this though, is that you should know how to process the skin, or at least have someone on standby who does it for you. This is because most organizations would not agree to purchase unprocessed animal skin.

You can Also Get Paid To Move To Another State: 10 Best Places That Pay Well

If the hog situation is so bad in a state, that state’s government can decide to give rewards for every wild pig you hunt. This is another proven way to get paid to hunt hogs.

You can also serve as a hunting guide for hog hunters. Due to the dangerous nature of this sport, such hunters would need guides.

If you are conversant with the area or the hunting activity, you can decide not to participate directly, but rather serve as a guide.

Depending on the number of days/hours in which the hunt would last is dependent on your pay. However, serving as a hunting guide is a lucrative way to get paid to hunt hogs— though not directly.

Remember, the aim is to solve a need and get profits for it. In locations where hunting at night is a legal practice, you can step in by providing the hunters with some means of illumination.

When you provide illumination in any way, they sure would be grateful for it and pay you for your services.

You can sell off your catch to restaurants. This is one of the most likely options, of course, which allows you to get a reward for your efforts.

In some states in the US, and also in a place like Italy, hogs are in high demand in restaurants, and would definitely earn you some bucks.

This is another area in which you can get paid to hunt hogs. What you basically have to do is hunt a hog, catch it alive and then offer it on sale to such interested companies and they’d take it from there.

These pigs usually still end up as meals, but the companies prefer them alive.

If you are licensed to sell ammunition, then you can sell the tools and guns needed by hunters, to hunters.

Hogs are not just difficult to catch, they’re difficult to kill as well. As such, you can sell the special guns and bullets capable of killing these animals.

If you own a helicopter, you can rent it out to hunters for the purposes of either surveying the environs or the actual hunting process.

You can as well start a company that focuses on renting out this equipment to hunters, for hunting purposes.

The aforementioned are all proven ways that could fetch you more income. However, note that some of these processes may be easier than the others, and others more expensive, but they all have one end goal, which is for you to get paid to hunt hogs.

Are Hog Hunters Wanted in Texas?

Victor Bailey opines that Hig hunting is now a business in Texas. So, yes, hog hunters are wanted in Texas.

At the moment, Hog hunters receive a bounty for the beasts in Hays and Caldwell countries. The millions of wild hogs destroying farms and grazing land makes free hog hunting back a popular demand.

In fact, the Feral Hig Task Force opines that a $5 per Texas hog bounty will be paid by check on tails or certified buying station receipts.

Can I Get Paid to Hunt Hogs in Georgia

Yes, you can get paid to hunt hogs in Georgia. For Eldrod who lives alone on a 40 sq mile barrier island below Savannah, hunting hogs is a full-time job.

Eldrod gets paid to hunt hogs in Georgia. Askinglot.com posits that hog hunters get paid $30 per hour to hunt hogs.

This means you can get paid over $500 per hunt daily to hunt hogs in Georgia.

FAQs on How to Get Paid to Hunt Hogs

What are the best ways to get paid to hunt hogs?

These are the best ways to get paid to hunt hogs:
10. Competitions
9. Coaching
8. Hides
7. The Government
6. Hunting Guide
5. Providing Lights
4. Eat-ins
3. Catching Them Alive
2. Ammunition
1. Helicopter Tours and Rentals

How much can I make from hog hunting?

The minimum you can make on hog hunting is about $120, so it can definitely be more. The greater the need for those wild pigs, the higher your pay.

How much do hog hunters make in Georgia?

Askinglot.com posits that hog hunters get paid $30 per hour to hunt hogs.
This means you can get paid over $500 per hunt daily to hunt hogs in Georgia.

If you want to get paid to hunt hogs, then you must be pre-informed that hunting wild pigs is such a dangerous game to venture into.

However, with the right knowledge— like the one provided to you via this blog post— as well as the right tools to equip you, you are on your way to success in the wild-pig-hunting business.