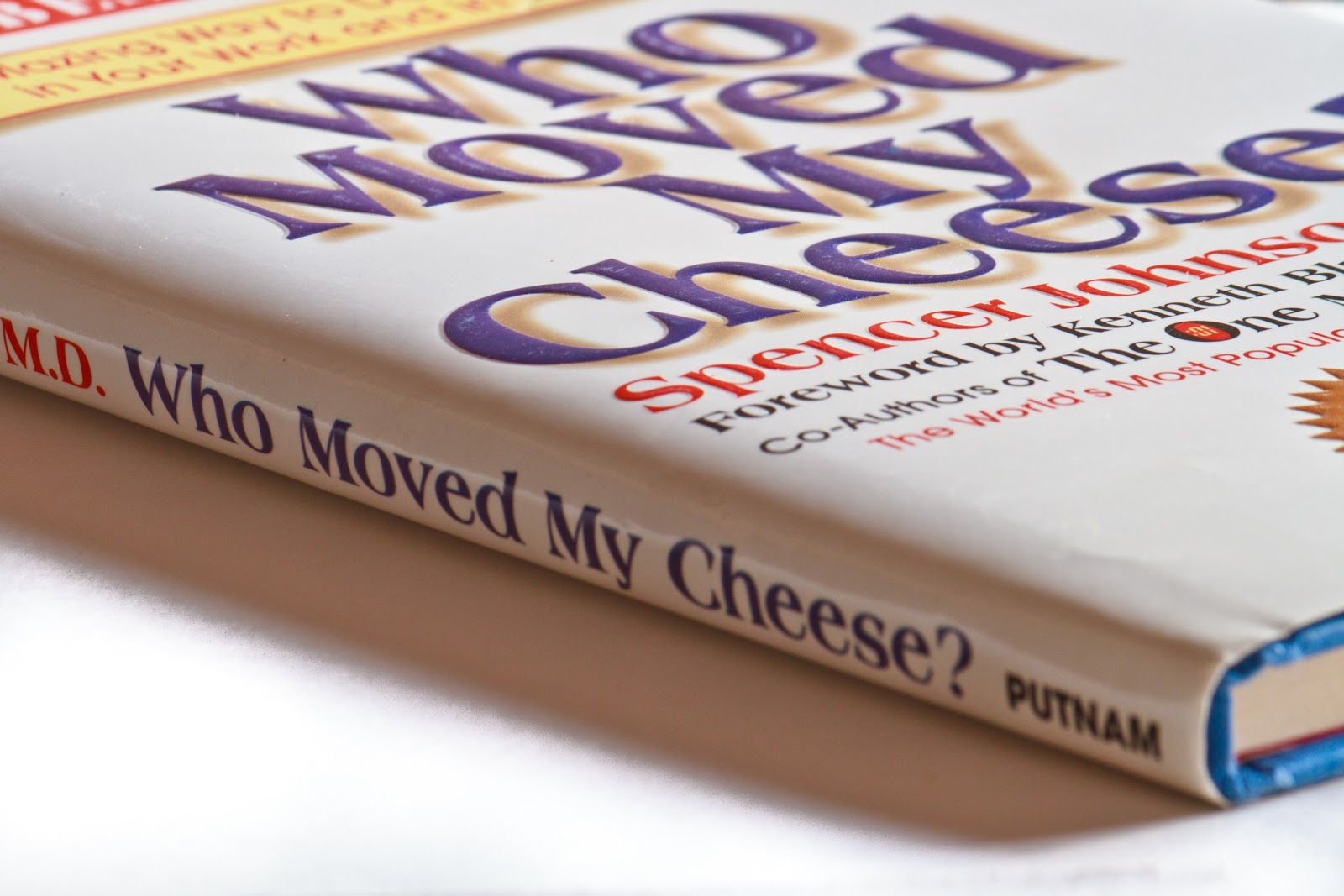 The Book, “Who Moved My Cheese?” was written by Dr. Spencer Johnson, a psychologist, thinker, and best-selling author, who used a simple, but loaded, illustration to describe how different personalities respond to Change when it occurs in their lives.

In this piece, we will provide a summary of the book, “Who Moved My Cheese?”; pinpoint lessons to learn, and create an analysis to guide people who had never come across the book or its concept before. In dissecting the whole piece, an attempt will be made to review its usefulness.

At the end of the day, our analysis of the book who moved my cheese will dovetail into the major points the writer has put forward, using the metaphors, nuances, and illustrations to eventually arrive at a conclusion of whether the book is worth writing and reading!

Please note that all the four characters in the book had built their lives around a huge chunk of cheese! They came every day to gorge on it. However, when the cheese ‘disappeared’, they each reacted differently to the incident; some taking it lightly and moving on to look for the next big piece of cheese, while others became immobilized out of shock, on account of a wrong they perceived had been meted out to them by the change that occurred. In fact, one of them was so enraged, he shouted, “Who Moved My Cheese?”

The Concept of Who Moved My Cheese

Who Moved My Cheese is actually the agonized cry of an unobservant actor, who, all the while, had failed to keep tabs on minor changes taking place around him. He or she then cries out at the injustice and unfairness of a major change.

Here are some terms and definitions that will help us understand the concept of “Who Moved My Cheese?” better:

The Summary of Who Moved My Cheese is that it makes us come to the realization that change is inevitable, and posits that it is rather better to expect, embrace, and improve ourselves by change, instead of playing the Ostrich, who doesn’t know when change is coming because it buries its head in the sand.

The story uses four main characters – two mice – Sniff and Scurry, and two mouse-sized people – Hem and Haw – to demonstrate how to, and, how not to, respond to changing situations in our life and environment.

Ironically, the book, “Who Moved My Cheese?” is one I had come across a few years back but was not motivated to read. As we analyze this book together, I daresay you will discover hidden things on your inside, you didn’t know were there. Now, let’s dive right in.

Summary of Book “Who Moved My Cheese?”

The book, “Who Moved My Cheese?”, is divided into three parts:

A reunion between old schoolmates, who found themselves discovering the various changes they had experienced over the years.

They mused together as to how they had failed to adapt to certain changes that came up in the course of life, many expressing surprises about the experiences others had gone through, thinking they were the only ones who had had some rough times.

This led to one of them sharing a story of something that helped him change his attitude and ultimately improved his life.

The kernel of the book – Who Moved My Cheese, told by one of their classmates, Michael, is the story he came across that made him see himself with all his faults and virtues.

Summarily, it portrayed what the four main characters in the story did in response to the disappearance of the cheese.

The two mice, who had been noticing that the cheese was reducing, promptly put on their running shoes and raced off to look for new cheese.

Hem, one of the two little people, who refused to accept the reality, dug in his heels and made no move to go in search of another cheese, in spite of his friend’s urging.

The most important character was Haw, who first gave way to the fear of the unknown, then realized that he must take action to get a better situation.

RELATED:  UberEats vs Postmates | Which Is Better In 2022? Legit or Scam

In the discussion by the classmates, they analyzed the book and were able to see themselves in the mirror of the four characters. They also took decisions on how to improve their lives, or find New Cheese.

Details of the Book Who Stole My Cheese

There are so many more important details about Spencer Johnson’s book. They include the background of the author, the moral of the story, some technical details about the book, the sequel to the book. Let’s go!

The Brain behind the Book

The author and brain behind the book is Dr. Patrick Spencer Johnson, a respected thinker, author, and medical doctor.

Ironically, Dr. Johnson, first studied psychology, securing a B.A. in the subject from the University of Southern California USC). He then proceeded to study medicine at the Royal College of Surgeons, after which he undertook some medical clerkships at The Mayo Clinic and Harvard Medical School.

He quit practising medicine when he concluded people get sick because of what goes on in their minds.

He then discussed with his longtime friend, Dr. Ken Blanchard, about the idea of “Who Moved My Cheese?” Blanchard encouraged him and promised to write the foreword for the book.

He and Blanchard later co-wrote the famous bestseller, The One Minute Manager, which became an instant hit and management manual for top organizations.

The Moral of the Story

The moral of the story in “Who Moved My Cheese? is that we need to be observant of our environment and anticipate change. When it comes, we would have been prepared with a Plan B.

Next is that we need to begin to implement, or take action to find that new job, friend, occupation, love, or whatever it is we need to make our lives whole again. This is because once change comes (because it will come someday), things are never going to be the same again, BUT we need to MOVE ON!

I sum up this area with one of Haw’s little notes, “ If you do not change, you can become extinct.”

Other technical details of the book:

Title:  Who Moved My Cheese: An A-Mazing Way to Deal with Change in Your Work and in your Life.

Editions:  Altogether, there are 40 formats and editions of this book, some of which were privately printed.

Ranks and Ratings: Number 2560 in the Books Category; Number 33 in the Stress Management category; number 11 in the HR and Personnel Mngt Book category and number 10 in the Workplace Culture category

A Sequel or Follow-Up book?

Yes, Spencer Johnson did write a sequel to the book, “ Who Moved My Cheese?”. The follow-up book, titled “Out of the Maze – A Simple Way to Change Your Thinking and Unlock Success, continues the story of Hem, the fourth character in the original book who refused to embrace change but chose to stay put in the Maze, hoping against all hopes that the Cheese would sooner or later reappear.

One review stated that even Dr. Johnson himself knew that the story was not complete.

The sequel, scheduled for publication in September 2018, was to coincide with the 20 years anniversary of the original best seller, “Who Moved my Cheese?” but was eventually released in November of that same year.

Incidentally, Dr. Spencer had completed the book and was scheduling edits with the intended publisher when he died late in 2017.

My Evaluation of Who Moved My Cheese

“Who Moved My Cheese? is indeed a book worth reading. The life lessons are inestimable.

FAQs about the Book Who Moved My Cheese

What is the main idea behind the writing of the book “Who moved My Cheese?

The man idea is that Change Must Come and we need to be prepared for it.

How does the author drive home his point?

He uses four little characters with their personalities to cement the point above.

What’s the difference between Sniff and Scurry?

Sniff is a nouse that Sniffs around the maze o get information
Scurry is the 2nd mouse that Runs up and down the maze checking the environment for tell-tale signs.