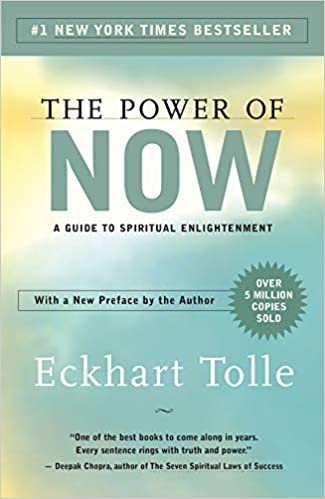 The Power of Now, written by German spiritual teacher and author, Eckhart Tolle is said to be one of the most influential spiritual books of our time.

According to Amazon, the book has sold over 2 million copies and been translated into over 30 languages.

But now, let’s dive into the nitty-gritty of the book:

What does The Power of Now Book Summary teach you?

The book is about present moment awareness and its ability to alleviate the suffering humans face because of their minds.

Eckhart Tolle says all pain is caused by the mind either being preoccupied with the past or future. But the past and future are only simulations as your entire life is always existing within the now.

Tolle says when individuals practice presence and acceptance they will begin to live more satisfying lives.

The Power of Now: A Guide to Spiritual Enlightenment was first published by Namaste Publishing in Vancouver in 1997.

In 1999, New World Library republished the book. This edition was more successful and the book held top positions on the New York Times bestsellers list for years after.

A brief history of the author:

Eckhart Tolle was born in 1948 in the small town of Lünen in Germany. Tolle didn’t have a very happy childhood and said much of it was characterized by pain and anxiety.

When he was 13 Tolle moved to Spain to live with his father. Tolle didn’t go to high school and instead studied languages, astronomy, and literature at home.

Tolle suffered from depression in his early 20s and looked for answers by studying psychology, literature, and philosophy.

Tolle’s transformation that led to the premise of the book

One night, when Tolle was 29 years old, he experienced a dramatic transformation. He realized that he could no longer “live with himself”. This led him to the realization that he was “two selves” – the self that was depressed and the one who was not.

This newfound awareness liberated Tolle as he understood he no longer had to identify with the part of himself that was depressed. He found he could live in a state of “beingness” where he was just observing and watching his mind.

This experience and the years after laid the foundation for the premise upon which The Power of Now is based.

Is the book- Power of Now religious?

Although Tolle makes references to God, spirituality, and religion, the book is not obviously religious at all.

A review in the British newspaper The Independent said: “it is Buddhism mixed with mysticism and a few references to Jesus Christ, a sort of New Age re-working of Zen.”

The main message of the book is less about religion and rather about humans’ identification with their minds, especially as it relates to the past and future.

Tolle has also said that he is not religious but uses teachings from Zen Buddhism, Sufism, Hinduism, and the Bible.

What does The Power of Now teach you?

But first, let’s look at the main objectives of the book. As is suggested by the subtitle of the book, A Guide to Spiritual Enlightenment, the book is meant to guide readers to enlightenment, which the Buddha described as “the end of suffering”.

This enlightenment could also be described as a new way of being that is more spiritual and less thinking-based.

Tolle says that all suffering is caused by the mental projection of pain that was either experienced in the past or anxiety about the future. He also says that the mind’s judgment or resistance to the present moment is what causes human suffering.

The book guides people to live within their present state of consciousness and break away from the mental entrapment caused by thinking and the ego’s attachment to thinking and form.

It teaches people that by being aware of their senses and inner worlds they can become more present.

Here are the eight key concepts presented in The Power of Now | Summary:

1. Humans’ addiction to the mind and the need to transcend this state to survive as a human race.

The book says that thinking is a disease in today’s society. Compulsive thinking is an addiction in the collective. People have succumbed to their minds so much that they don’t use their minds, but instead, let their minds use them.

Most of the collective is living in an unconscious state where they identify with their minds. This creates the false self, the ego, whereas the true self is based on Being.

The false self exists in fear and to save the human race a permanent shift in consciousness is required.

2. Knowing the Ego, Mind and Emotions:

The ego is the false self-created from identification with the mind.

Mind is not just thinking or thought, but it is also the emotions and unconscious mental-emotional reactive patterns humans display.

RELATED:  Top 21 Crowdfunding Platforms For All Countries in 2022

This is one of the concepts in the power of now book summary.

3. Knowing your true self and Inner Purpose versus your outer purpose:

Your true self is your life that exists now, it is your being in the now and it is real. Your life situation exists out of experiences and events.

Similarly, your inner purpose is to be in the present, in the now as opposed to your outer purpose which is to achieve goals and milestones.

4. The importance of practicing surrender and acceptance to be in flow with your life, your being and the now:

When you accept your state, life, and circumstances fully, you come into flow with life. Resistance is the mind, so when we accept we come into being.

The only time that your life exists is now, so it is important to be present in the now to fully be present to life.

Time can be used practically for the completion of tasks etc, but it is always important to come to the present moment.

This is an essential of the power of now book summary.

By observing repetitive thought patterns you can identify how the mind can use you and that you are in fact not it.

This creates the opportunity to take new action if necessary and to be free from external conditions and mind activity.

7. Discovering Being and Love

Being can only be discovered when the mind is still. Being is the eternal part of you that is not concerned with life or death. Love is a deep state of being that you must allow flow from you through presence.

8. To be awakened and enlightened

This is not as otherworldly or as superhuman as people think. It is instead accessible to us all but is also greater than us all.

It can be tapped into and experienced when one is in one’s being and not their mind.

This is the last essential in the power of now book summary.

Is The Power of Now a good book?

The book has received mixed responses. How people have experienced it depends largely on their interest in spirituality and what their understanding of it is.

Some have said that the book has been pivotal in their healing and spiritual awakening journey. Others have described the book as “meditative” and will go as far as keeping it on their bedside tables to read whenever they feel anxious or need to bring themselves back to presence.

Detractors have said that the book is New Age spiritual gibberish. Some have accused Tolle’s work of “toxic sophistry” stating that the concepts he uses in the book are false but clever, arguments designed to make the reader look stupid.

I read the book seven years ago when I had just left an abusive relationship. The book helped me reframe a lot of the entanglement I had experienced. I gained a lot of perspective on my pain and its history and how that contributed to my being in the situation I found myself in. I’d say it’s a must if you want to liberate yourself from old ways of thinking.

However, your spirituality is personal and it’s up to you to decide what philosophy you want to create on that.

Long story short: You’re either going to love or hate this book. The power of now book summary is a good one.

What else do you need to know about The Power of Now Book Summary?

Well, that’s it, anything else you’d like to know about this book, you’d have to read the actual book.

And I’m keen to know, which concept in The Power of Now based on what you’ve read in this post has been most intriguing to you?

This is the power of now book summary!

Let me know in the comment section below which one you find most intriguing and why!