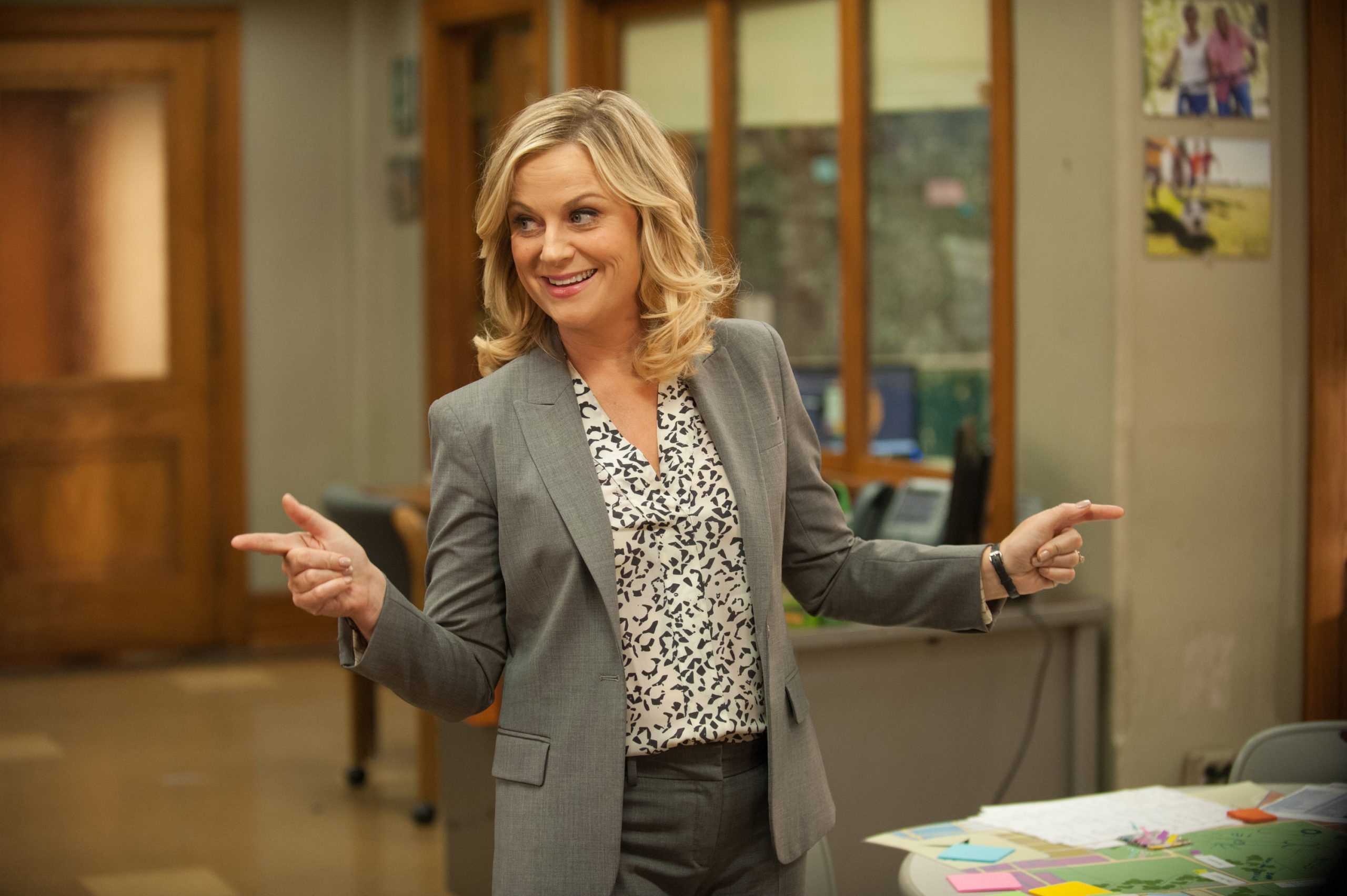 If you’re a fan of NBC sitcoms, then you’ve probably heard of the Leslie Knope quotes. Leslie Babara Knope was the protagonist of the show “Parks and Recreations”.

Played by actress Amy Poehler, Leslie Knope was an overachiever who believes the government should serve the people. As a smart lady who wanted everyone in her orbit to succeed, some of her thoughts on leadership and service have gone ahead to become motivating quotes for all and sundry.

Amy Poehler plays the role of Leslie Knope who serves as the Deputy Director of the Parks and Recreation Department of the fictional city of Pawnee, Indiana.

Leslie was a “yellow-haired female who likes waffles and news.” Comically, she loved her coworkers and friends with fierceness, creativity, and unconditional loyalty that should inspire us all. Leslie always wanted everyone in her orbit to succeed, find happiness, and make the world a better place.

This article explains the top 15 quotes of the fictional character Leslie Knope on leadership and service.

About the Character “Leslie Knope”

Leslie graduated in the top 5% of her class at Pawnee North High School. She was Co-Vice President of the Student Body and a member of Model United Nations.

As a strong, ambitious woman in a town where people don’t always believe in her, Leslie Knope sticks to her convictions and doesn’t let anything stand in the way of getting her job done and helping her constituents. She knows how to motivate a crowd, is constantly supporting and empowering her friends and loved ones, and never gives up on her dreams and goals.

Although Leslie Knope is a fictional character, most of her quotes on leadership stands the test of time.

15 Quotes About Leadership and Service from Leslie Knope

Here some quotes from Leslie Knope that will inspire you to lead and serve.

#1. “One person’s annoying is another’s inspiring and heroic.”

This quotes sounds a bit funny but it is probably the most relatable quote you’ll see out there. It is a great reminder that you’re only human and you can’t please everyone, so you have to be willing to accept that.

Take it from Knope — it’s likely that for every person who thinks you’re not good at your job, more people respect you and look up to you.

Knope is trying to let us know that, although one person may love you, the other may have quite the opposite reaction to you. As a leader, you won’t be able to please everybody especially cause we’re all so unique.

So, don’t take it to heart that some people oppose your decisions; don’t let one person’s opinion get you down. Just keep up the good work and remember that ‘you’re someone’s inspiring and heroic’.

#2. “What I hear when I’m being yelled at is people caring loudly at me.”

At a first look at this quirky quote, you may be a bit confused. Like, ‘how exactly is it that people are yelling cause they care?’ Well, Leslie’s eternal optimism was always one of her character’s best assets. No matter what was happening, she knew how to see the good in a bad situation.

More specifically, if you’re ever in a squabble with a colleague, friend or employee, do not take it to heart. Instead, find out why he/she is upset with you and look for a way to solve the problem.. The reason probably is cause they either expect better from you or they want you to wake up and smell the roses.

Although waffles should probably not be counted as a priority, Leslie did have the right idea. Work should most definitely be third though. We need to know how to place importance on the things that matter to us especially when it comes to friends and family.

We hear a lot about companies replacing employees within minutes of their death, why would you wanna place that over your family and friends. Good one Leslie!

Even when you’re in charge, it’s not always possible to handle everything on your own. Sometimes, you need a friend or colleague to give you support.  Okay, maybe getting a call or text every 30 seconds is a bit of a stretch but i’m sure you get the idea.

Remember that you are not alone and that there is a whole support system rooting for you. Never be ashamed to admit that you don’t have it all together. Be like Leslie, she knew that she had Ann. Ensure that you find your ‘Ann’.

#5. “I am big enough to admit that I am often inspired by myself.”

There are thirteen framed portraits on Leslie’s office wall. She calls it her “Wall of Inspirational Women.” Twelve of these women are historical figures, including Bella Abzug, Condoleeza Rice, and Sally Ride.

The thirteenth frame holds a picture of Leslie, herself. Egos aside, it is important to remember those who came before you and let them continue to inspire you to do your best work.

Sometimes, when you’re down in the dumps, it’s okay to draw inspiration from yourself. Be your personal cheerleader, give yourself affirmations and come out to face the world blazing!

This is another motivating Leslie Knope quotes on leadership and service.

#6. “I have the most valuable currency in America: a blind, stubborn belief that I’m 100% right.”

In real life, this attitude can cause real problems in the workplace, but let’s take a closer look. The character Leslie Knope is capable of changing her mind.

However, she’s never willing to compromise on her principles. She stands by her values and doesn’t give up on the goals of her team. There truly is nothing more honorable than a woman who knows what she wants, how she wants it and when she wants it. Stay with your guts and stand your ground.

When you’re busy balancing everything else, it’s tempting to let your own needs slide to the bottom of the priority pile. But it’s exactly at those moments when we need to take the best care of ourselves.

Self-care as a leader is very essential lest you’ll be the one who needs to be led (to a hospital in order to be checked up).

Honestly, though it’s easy to forget to check on yourself with so many responsibilities, but Leslie never failed to remember that she also needed some TLC. Take yourself out and remind yourself that everything with be fine in due time.

#8. “You only get one chance to make a second impression.”

First impressions are crucial, but they aren’t everything. If you leave a meeting, conference, or any other event where you feel that you haven’t left the best possible impression, don’t sulk, instead, focus on how you can learn from your experience and show your best self at your next interaction.

You could even arrange an interaction with the targeted client. Whatever you do, make it the best encounter ever and keep your head up! First impressions are everything… except when they’re not!

This is another Leslie Knope quotes on leadership and service.

#9. “Yesterday I was tough and direct; today I have to be charming. Basically, yesterday I was Hillary Clinton and today I am Bill.”

Effective leaders have this one skill in common – know your audience. If you aren’t getting your message across effectively take a step back and determine how you can modulate your behavior and tone.

If you’re dealing with people who feel like they’ve been getting the short end of the stick, then you need to come down to their level, be in their shoes. A good leader has multiple personalities and facial expression sfor different encounters.

#10. “No matter what I do, literally nothing bad can happen to me. I’m like a white male US Senator”

This quote of Leslie Knope is great because it’s all about fearlessness. Visionaries are the ones who can see things before everyone else. Be confident and maybe sometimes be just a little overconfident, in your skills, choices, wardrobe,food choice (kidding!), etc. But really though, Go out there and be as fearless as the King of the Jungle

Be confident in your skills. Don’t ever think that you’re not up to the task at hand because you’re more than enough.

There will be times when you feel like you don’t have what it takes. It could be because of the opinions of others, or even because it’s just one of those days. Always remember, ‘You are more than capable, you have what it takes to get the job done!’

As a leader, it’s necessary to avoid panic in severe cases and situations. Leslie has the right idea, she strategizes before she acts. There is nothing better than a leader who knows how to avert crisis amongst the masses.

RELATED:  What Does Wealth Mean? | 10 Facts about Building Wealth

#13. “The raccoon problem is under control. They have their part of town and we have ours.”

This is another Leslie Knope quotes on leadership and service..

Sometimes, a little space is all humans and creatures of any sort need to get along in harmony. Not everyone is bound to get along so respecting the boundaries of others is quite essential. Down, the line though maybe a real treaty might be necessary, but for now, highlight boundaries! Remember though, conflict is only natural when two different opinionated people meet.

#14.  “I mean that’s why people respect Hilary Clinton so much because nobody takes a punch like her. She’s the strongest, smartest punching bag in the world”

It’s quite common for politicians to take verbal beat downs, be it from their adversaries or even from the people.

However, if you can take the punches and still come out stronger, it seems to gain you respect. The same thing applies as a leader; you just have to roll with the punches.

Never put too much emphasis on the negative things people say (unless they are actual concerns that need fixing). Focus solely on the positive and also on how to move forward.

#15. “We’re a nation of dreamers and it is my dream to build a park that I one day visit with my White House staff on my birthday. And they say, ‘President Knope, this park is awesome. Now we understand why you are the first female President of the United States.”

For example, Jeff Bezos most definitely did not discourage Elon Musk from becoming the world’s richest man. So, do not let someone you look up to deter you from attaining your ultimate goal.

Most of these quotes may look a little funny and sound funny too, but if you think about it, they are quite relatable. Leslie Knope was quirky and fun-loving but she was also smart, ambitious, and bold.

So, in whatever you want to do, be the Leslie Knope of it. Learn about these Motivating Leslie Knope Quotes On Leadership & Service.