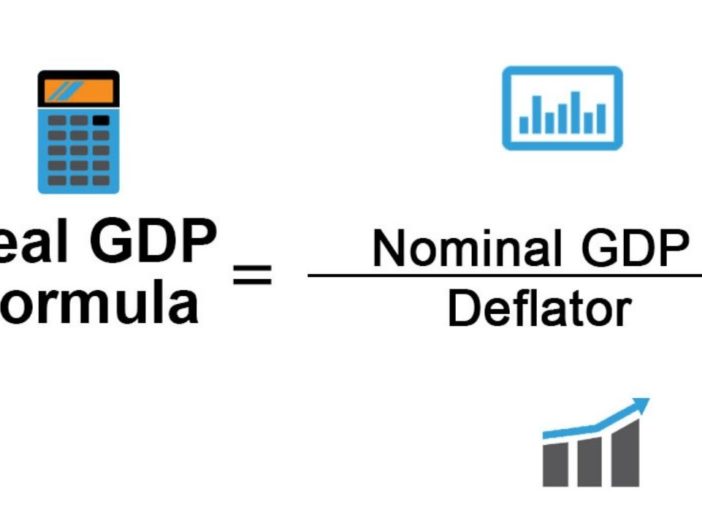 When it comes to politics, GDP is highly debated yet poorly understood by so many. GDP means different things to different individuals in society.

To economists, it is the size of an economy while GDP is an economic growth strategy to politicians.

These definitions and others just reflect superficially what GDP means; especially, to the layman. With this ineptitude explanation of GDP, calculating GDP becomes an issue.

This article compiles all you need to know about GDP. It explains GDP, the Real GDP formula, and how to calculate Real GDP in 2022.

Read this piece to the end to gain insight into what gross domestic product means. This will aid you to engage in a duel effectively. The table of contents below explains reveals the order in which these points were duly discussed.

What is Real GDP?

This refers to a measurement of economic output that accounts for the effects of inflation or deflation. Unlike the nominal GDP, real GDP provides a more realistic assessment of growth.

Basically, the gross domestic product is the market value of all final goods and services produced within a country in a given period of time.

The first word “gross” simply means that GDP measures production irrespective of the different ways a product is used. “Domestic” emphasizes that GDP measured must be products within a given border.

“Production” on the other hand clarifies that products can be used for immediate consumption, investment into a fixed asset, or replacement of fixed assets that have depreciated.

GDP includes services and values produced by the government. They could be businesses that charge for time or labor rather than a per-unit product. Professions that fall into this cadre are -lawyers, doctors, plumbers, electricians, etc.

In a nutshell, real GDP measures all gross domestic products as they adjust for inflation and deflation.

How is Nominal GDP Different from Real GDP?

Real GDP focuses on gross domestic products as they adjust for inflation and deflation while nominal GDP measures GDP based on unadjusted prices.

In clearer terms, Nominal GDP ascertains the total output of an economy based only on prices. Real GDP on the other hand focuses on the economy’s actual value. It is more accurate than the nominal GDP.

Mostly, when a country’s GDP doesn’t specify the type of GDP – it is usually a nominal GDP. It simply includes prices and growth. A country’s real GDP represents actual pure growth.

What is the Formula for Real GDP?

To get GDP deflator, use the formula below:

The deflators refer to the figure that is generated from the rate of inflation. Usually, the Bureau of Economic Analysis provides the deflator on a quarterly basis.

Using this formula, the effects of inflation are removed when the nominal GDP is divided by the deflator.

How To Calculate Real GDP

To calculate real GDP, firstly, you must determine how much GDP has been changed by inflation since the base year. Secondly, you must divide out the inflation each year.

If prices change while output doesn’t, nominal GDP would change. The real GDP determines the purchasing power net of any price changes over time. Using the formula for Real GDP, simply divide the nominal GDP with the deflator.

RELATED:  What Is A Virtual Debit Or Credit Card?

If you need to calculate Real GDP for a given base year, multiply the prices of goods and services purchased in the base years.

Basically, Real GDP simply refers to GDP evaluated at market prices of some base years. So, to calculate real GDP for 2005 with 2000 as the base year – take the quantities of all goods and services purchased in 2005, and multiply them by their prices in 2000.

How Does Real GDP Measure Production and Services

The Real GDP only counts final production. It measures the final output of goods and services produced in a state within a give period.

GDP components divide production into categories. With this, you can tell what contributes most to the economy. Also, the real GDP measures service like hairdressing, bank services, and even services provided by the U.S military.

The inability to calculate some services like unpaid child care makes the Real GDP a false measurement of the true U.S production.

Generally, Real GDP is used to compute economic growth. To get accurate results , you must use real GDP which calculates real growth.

If you opt for nominal GDP, you may just be calculating price and wage increases.

With the Real GDP, the country’s economic growth can be determined. It tells if it is growing more quickly or more slowly than the quarter before.

RELATED:  Wikibuy Reviews 2022: A Legit Or An Online Shopping Fraud? (Capital One)

In addition, Real GDP reveals the GDP growth rate which helps investors adjust their asset allocation in their portfolios.

The Real GDP is also used to compare the size of economies throughout the world. It is important to consider the different cost of living between countries being compared. This can be achieved if you use a purchasing power parity.

This article explains in detail what each term means and how you can get each figure using the right formula. So, read through to learn how to calculate Real GDP accurately. It actually means just more than economic growth.